As a last minute entry to the Art O’Neill Challenge I probably wasn’t taking it quite as seriously in the weeks leading up to it as I should have. There were 5 of us that were planning on running together, safety in numbers and with me as the designated navigator! We managed to squeeze in a couple of recces of the off road section with one being at night which boosted the night navigation confidence a bit. Although with every recce we took a slightly different route which gave us some options on the night, if I could remember them!! One thing that we learned for sure was that it was going to be a rough night on the hills even in the best of weather.

Race day comes ‘round a bit quicker than expected. Although the “Race day” doesn’t really cover it given that we start at 1:00am Saturday morning!! It’s a strange one though as given that it’s so late at night I couldn’t justify taking the day off work, so it the normal 5:30am start for work on the Friday. This was the start of a very long stint without sleep. Home from work and it’s panic stations to get all the gear packed up, trying to decide if a one or two bag strategy is the way to go. Turns out “two” was definitely the right decision; lighter bag for the road section with the second bag prepacked for the mountain section meant I could swap bags, change gear and keep going with minimal effort. The forecast was not looking good for the night ahead, so a couple of extra layer are stuffed into the drop bag for checkpoint 1. 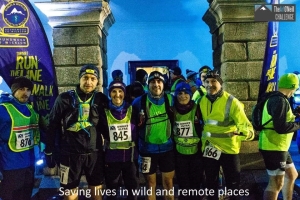 The Dream Team are ready for the off

The hardest part, or so I thought, was the waiting around for the race to start. We’re all familiar with turning up to a race an hour or so before kick-off feeling fresh and raring to go. We got to registration at 9:30pm figuring there was going to be a queue and bags had to be dropped by 11pm and then the dreaded wait until the off at 1:00am. Nothing coffee and good company couldn’t sort though. Having gone with the age old strategy of “shorts all the way!” I was on the receiving end of more than my fair share of funny looks and the stare from the guys from mountain rescue, their demeanor clearly saying “we’re going to have to pull this muppet off a mountain in 4 hours’ time in his shorts”. I was out to prove them wrong.

As we gathered together in the courtyard of Dublin castle in the rain, there is a buzz of excitement with most not really sure of way lay ahead. One thing was certain though; it was going to be very wet and inevitably very cold. Bang on 1:00am and we’re off! The fantastic assistance of the GardaÍ made the run from the city centre through suburbs and out through Firhouse pass in a blur. That blur was short lived though as the road started to rise before us. This was the start of about 10k road slog into the Dublin Mountains. The 30k or so on the road passed pretty uneventfully, the calm before the storm so to speak. 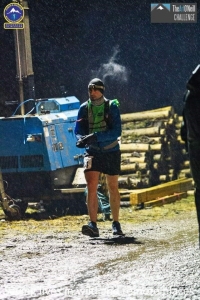 We arrive into checkpoint one, the start of the mountain section, just under three and a half hours into the race. Some of the steeper sections of road had slowed us to a walk in places. The aim here was to change base layers, add addition layers, and get some food in, swap packs; basically mountain proof myself for the slow rough going ahead. Best laid plans and all that… I did manage to mountain proof myself but the food wasn’t to be, two of our party were succumbing to the conditions and needed help getting geared up. With time of the essence and the guys sorted it was time to press on, food would have to wait. I had my bladder filled with Tailwind though so I knew I was getting enough calories in to keep going, that bagel would have been nice…

The fire road soon disappears and is replaced with mud, heathers and bog holes; we’re headed for open mountain. As we climb we realise how much shelter the road section had provided us. Conditions were worsening by the minute. Visibility was hampered by the horizontal rain. It’s difficult to put into context just how bad the conditions were up there. The wind and the rain were unforgiving as we traversed over Billy Byrnes Gap. From our recces I knew the next couple of kilometres were relatively downhill although there were three rivers to negotiate before the haven of check point 2. The river crossings were perilous due to the sheer amount of rain that had fallen in the preceding days. With wet feet anyway the frigid river water only made things worse. Although wading into knee deep water was the lesser of two evils; the rocks, if any, were treacherous! After each crossing it took ten to fifteen minutes for most of the feeling to return to my feet, some numbness was a good thing. The last river crossing leads to some very welcomed fire road and the short trot to check point 2.

COFFEE!!!! We hit check point 2 just before 7:00am, just under 6 hours into the race. Probably the best cup of coffee I’ve ever had awaited… but at this stage I’d have probably just munched on the granules and thought it was gorgeous!! Short turn around here, no promise of fresh gear here, just something hot and the bagel I’d been dreaming of since check point 1. Back on fire road for most of the first 2k but the worst terrain of the entire race was to come but thankfully daylight was fast approaching. As we head off-road again we quickly realise that the rivers are significantly more extreme out here. Crossing these is not going to be taken lightly. With our route adjusted slightly to accommodate safely crossing the first and fastest flowing river we trudge on, our goal in sight… sort of! Another tough climb, a couple of rivers, some bog and a very ropey decent is all that lies between us and the finish line.

With our waypoint marked and daylight upon us we make our way up and over the final climb. Other competitors are now visible against the landscape. We’re all taking direct routes and I’ve no doubt thinking the same as us “do they know something we don’t?”. Confident with our trajectory though, we keep the momentum up. Other soon disappear as we cross the boggy section at the top, not that we were faster but due to the size of the holes we were negotiating through, some up on 5 feet deep. This soon opens up though and a gravel trail comes into view below us, the final stretch home. While it’s not particularly steep it’s a constant downhill slope to the finish, “brilliant!”. Our, or at least my, delight doesn’t take long to pass though, the trail soon turns into a river, well above ankle deep in places!! My feet are screaming at me from the gravel that’s managed to find its way in to replace my insoles. I wish they were numb again! 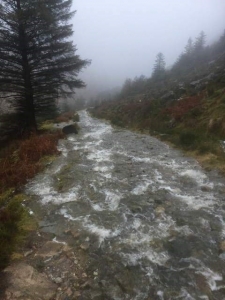 The last decent to the finish…that’s water not snow

We can hear the finish before we can see it, a very welcome sound. As we round the final corner there’s one last fjord to cross, I don’t care at this stage and I’d swim it if I had to!! We cross the line 9:23am, 8 hours and 23 minutes after we left the comfort of Dublin castle, it in itself a distance memory. Sticking to our guns on the navigation bought us more than 20 places in the last section from check point 2 to the finish. Resulting in mid-20 finishes!!

We get the shuttle bus back to the Glenmalure lodge for some hard earned grub and to share war stories. We close off the day on a high and make our separate ways home for some sleep. The one bit of advice that a previous competitor offered up at the start was three simple words “relentless forward progress”, something that will stick with me for many races to come.

Hats off to the guys in Dublin Wicklow Mountain Rescue Team for planning, organizing and running such a fantastic and unique event. They provide and invaluable service day in day out in all weather and are a very worthy cause. I’ll be back next year, if they’ll have me (it’s a lottery), hopefully with ambitious plans but they’ll have to wait 12 months to be revealed! 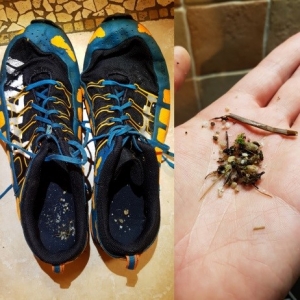 The contents of my shoes

About the Author: Dave Gowan

Avid adventure racer, marathoner and cyclist. Dave went from Couch to 5k to marathon in 2014 and on to complete his first Adventure Race in 2015. Since then he has completed 6 marathons, an ultra marathon, The Race and multiple adventure races. He is attempting triple back to back marathons at the end of September and plans to squeeze in a few more races before the end of 2017. Check out his back story here http://kayathlon.ie/2017/06/01/dave_gowan_winner/