Gaelforce Dublin – One year on!

Gaelforce Dublin – One year on!

With Gaelforce Dublin less than 2 weeks away (Sat 17th Feb), we spoke to seasoned adventure racer, Barry Dempsey, as he reflects on his race (49k route) last year…

As a regular recreational Adventurer Racer when Gaelforce announced a new event in Dublin in February, i thought yes an event i can go to and from in the one day. But then i did realize, oh wait its very early in the year i wont have a lot of training done in preparation for the race.

I entered the 49km route and thought it would be OK as there was only one run and I’m stronger on the bike so it should be ok. Little did i know what was to come, as the Gealforce team really did pull out all the stops making the bike sections one of the most challenging of any adventure race in 2017, from road, to field, to forest, to an endless uphill after the run. 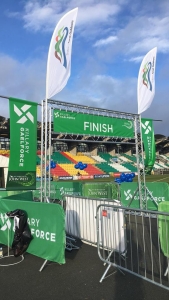 Tallaght Stadium was the setting for the start with all the usual Gaelforce green banners, deck chairs etc as usually just with a stadium view instead of Killiary Harbour. All the usual faces started to appear and the excitement started to build looking forward to the challenge ahead from from this unusual big city urban setting.

Now this will tell you how early in the year and unprepared i was …..had all the usual bits and pieces organised in the car, food, water, gear, race numbers etc and then when i got the bike out i hadn’t used it since Quest Killarney in October and guess what the rear cog was seized up and definitely not moving free!!!!! I went to the bike maintenance stand for help and we oiled it right up but there was nothing i could do in time for the start. I had to start with a bike  that was far from free and the first section was of course uphill!!!!

After the aerobics class warm up we were off on a short run around the park and back to the bike to head up into the Dublin Mountains.

Doing a race for the first time is great as you go into the unknown of what exactly the challenges are that lie ahead but in 2018 I look forward to knowing the course so i know what to expect, where to push and where to recover. The first bike section goes uphill and onto mountain bike terrain on field tracks where you just have to get off the bike. After a road section its onto forest gravel roads before the downhill to the reservoir for the kayak.

The kayak is great but beware there is literally no shore, you might think you can step out a meter from shore….don’t as you will be waist deep. The run is flat along the reservoir and then up Kippure and back down the same track to the bike. The run is wet esp close to the top but you can stretch the legs out as there isn’t any major incline, so potentially fast for the good runners in good weather and that’s not me.

Then there was the first road climb in 25 races that forced me off the bike and just had to walk, it was a killer and cant wait to get the better of it this year. This was the point where i reached my Maximum Effort Level and the cycle to the finish in Tallaght was recovery.

For the elite they should reach there MEL(Maximum Effort Level) at the finish but for us recreational racers on most 50km plus races their is a point where the course breaks them or you reach your MEL, for example The Reek on Gaelforce West or the end of Mangerton on Quest Killarney.

If this cold weather continues and if February is going to be as cold as forecasted Gaelforce Dublin in 2018 could be one to remember!!!!!!

The best of luck to everyone entered and I will us everyone in Tallaght. 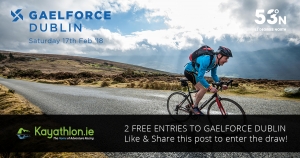 The new adventure racing season is here!!!
Our friends at Killary Gaelforce have given us 2 entries to give away to Gaelforce Dublin on 17th Feb.

Guaranteed to be an awesome adventure. Who wants in??

To enter, click on image above and follow instructions.
Winner will be picked on Wednesday 7th Feb at 6pm.

Looking forward to seeing you at the starting line!