All week I watched the weather, worrying about rain, wind, frost and even snow. If you are familiar with the Dublin mountains, they tend to have their own eco-system. Where the rest of the capital may be drenched in sunshine, the Dublin mountains can be slow to loosen the grip of recent weather fronts. As it turned out, for February, the weather was pretty damn good. It was a beautiful morning basked in sunshine and it wasn’t long into the race before competitors were shedding layers.

Brigid and the Gaelforce crew got the proceedings underway. A quick paced 1km run brought us to the first transition. Before long, we were leaving the urban sprawl behind us and heading into the hills on the bikes. 2.5k in and the uphill climbs started. I had be warned that this race would definitely favor stronger cyclists. I soon found out exactly what was meant by that. The next 2k was on back country road, where I only witnessed a handful make it to the top without dismounting. Then it was up onto the private farmlands. This is where those with serious knobbly, chunky tyres reaped the rewards and slowly glided through the (in places) knee deep mud and puddles. Reaching the top was a welcomed respite. I stopped to look around and could see Dublin city off in the hazy sunshine passed the rolling hills. Was a beautiful sight. Back down onto solid concrete again before reaching another gravelly woodland which was great fun to power through. Another tough hill to make it up and then flat out for roughly 6k down to the bike drop at the picturesque Bohernabreena Reservoir. A protein bar and quick electrolyte drink and off we went to the kayaks which was a short 1km run/leg shake out, passing one of the happiest race officials I have ever come across at the bridge and into kayak. A well deserved leg rest. 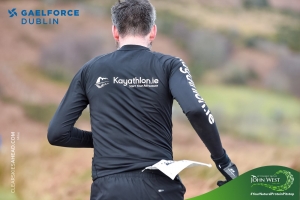 The reservoir was lovely and calm. No white horses (they were further up the road). The sun glistened off it. You could have been forgiven for thinking we were closer to the summer. Back on our feet again and for a 3k trail and road run to the foot of the mountain where current national adventure race race title holder race leader Killian Heery passed us with about 20 seconds to spare Luke McMullan. Whilst in my head I was trying to do the maths on how far behind I was, I was greeted by 3 wild horses galloping at pace towards me, down the road. They left a trail of bodies jumping for cover into ditches to avoid them. Gaelforce, you really pull out all the stops ;). Up the mountain we persisted covering a 230m assent over 4km. Power hike time. Met by the ever vigilant and helpful  Mountain Rescue Team on the way. Reaching the summit, “well thanks be to jaysis, some downhill at last” was common cry. Back down the same route was grand with about 50% of it downhill. Happy days.

Back to the bike transition after the run, quick refuel and off we flew. The first 4km was flat enough but then the Killer. Roughly 4.5k of 300m incline up to Military Road. 12% gradient in places. I’d like to see the stats on how many made it to the top without dismounting. Cramps were waiting to happen. From Military Road, it was flat out all the way back downhill to the Stadium where warm refreshments, welcoming faces, massages, finishers medals and more John West Food than you could shake a stick were lying in wait for the all conquering adventure racers.

Like I alluded to in our race preview, anything Gaelforce put there name to, will really test you and this event was no different. This course had particular emphases on cycling with difficult inclines and tough terrain. My bike looked like it had been dragged backwards through a swamp but that’s all part of the adventure. The tougher the challenge, the greater the achievement.

And if there are any budding entrepreneurs out there, a bike valet service would have made a killing at the finish line. 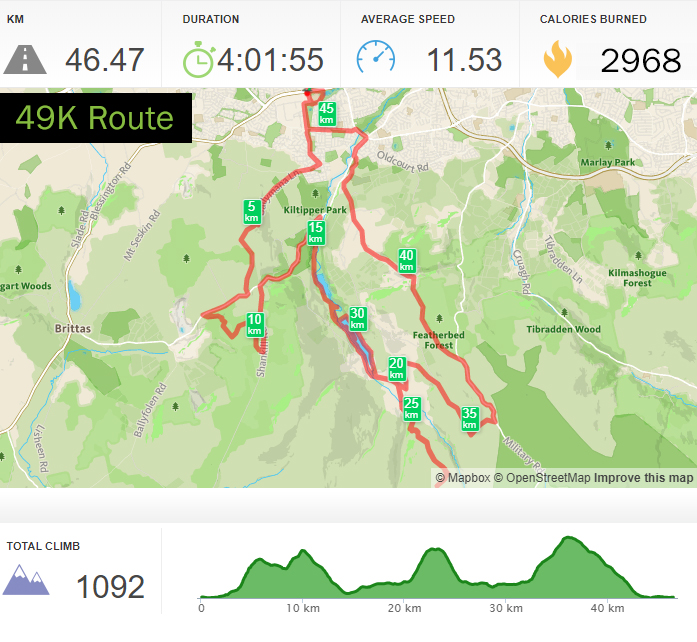