I decided to kick off my adventure racing season with Quest Kenmare. I knew that I had put in a solid winter of training and attempted to address my weaknesses from last season. I started regular strength and conditioning classes in a bid to develop glutes of steel and bullet- proof my body against injury. I also had been getting out mountain-running on Wednesday nights with a friendly group from IMRA. The goal of this was to experience varied terrain and improve my confidence on the technical descents. These runs were character building to say the least and brought us to some of the most remote parts of Wicklow. It was not uncommon to find oneself thigh deep in bog holes during these weekly excursions.
The first race of the season was always going to be nerve-wracking but I never imagined the nerves would set in so far in advance. The week before Kenmare, I developed a crisis of confidence. I also managed to become inflicted with tendonitis in my elbow, commonly known as golfer’s elbow. I’ve never played golf so I concluded that the injury was caused by swinging a heavy dumbbell awkwardly. I’d convinced myself that the race was going to be a disaster. Knowing that these self-doubting thoughts weren’t going to do me any favours; I had to give myself a good talking to. I told myself to focus on controlling the controllables. This involved getting my bike serviced really well, getting lots of sleep and eating healthily. I also retrieved my ‘adventure race packing list’ from last year and made sure I had everything I needed. On the morning of the race I told myself I had to get to the event really early, get organised and position myself at the very front of Wave 1. When I arrived at the start line, I realised that four of strongest females Laura O Driscoll , Ellen Vitting, Ger Kelly and Regina Sheehan had the same idea.
The race started fast and I wasn’t particularly comfortable in the lead group. About 5k out the road I dropped a wheel and found myself 4th lady, in the wind, on my own chasing the lead group. This was not where I wanted to be. Shortly after, a touch of wheels in the lead group brought two cyclists down.I watched one of the bikes bounce across the road. The bunch slowed down considerably as competitors manoeuvred their way around bikes and bodies. I hoped nobody was badly hurt and felt guilty for thinking ‘Is olc an ghaoth nách séideann maith do  dhuine éigin’. ..a slight acceleration to close the gap and I was back in a group.
When I arrived at transition, I made the exact same mistake as I had made in Quest Killarney. I started to race out of transition only to discover that I still had my helmet on. I berated myself for my own stupidity. This is perhaps what Barry Cronin would refer to as my tendency to ‘faff about at transitions’.
My legs felt heavy and sluggish starting out on the run but I was in 3rd position in the women’s field and knew I needed to keep pushing. When we got to the mountain itself, it was wet and slippy and the steep gradient meant most competitors were by now walking. I passed quite a few men on the descent and enjoyed negotiating the wet slippery rocks as I commended myself on my newly found bravery.
Back at transition, I located my bike quickly and set off on the long bike ride towards the much-dreaded Dromoughty. I first made my acquaintance with Dromoughty back in February when I travelled  home to Killarney for mid-term break. Local man Eamonn O Sullivan had not been exaggerating when he described it as brutally tough even for the most seasoned cyclist. There was grass in the middle of the road and I was forced to dismount three times during the recce. At least I now knew what to expect.
I quickly caught the rider in front of me and then three other men joined us from behind. One of them was wearing denim shorts. I observed him for a while and concluded that despite his questionable clothing choice he was a strong bike rider. Anyway now was not the time to begin extolling the virtues of lycra. One of the men took charge and we worked well in our little groupetto, everyone taking short turns at the front. I was still in a group at the summit of Dromoughty but lost everyone on the steep descent. As we turned left on to the main road, I could see the group dangling in front of me. I tried hard to close the gap but eventually had to resign myself to a solo time trial back to Kenmare. 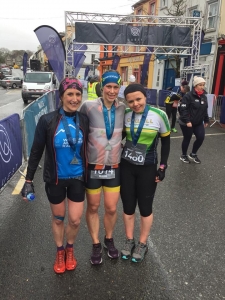 When I reached the kayak section, I jumped onto a double kayak but was alone. After I pointed out I was in 3rd place, the stewards offered me a single kayak what I really wanted at that stage was a muscly hunk (preferably a proficient Kayaker, of course) to appear from around the corner and get into the back of my kayak. When this didn’t happen, I eventually gave up and jumped into the single kayak.
As soon as I started paddling my legs began to cramp. I think I must have forgotten everything I learned last summer about kayaking. They say to gain optimal power you should push off your legs and rotate the torso. My posture resembled a sack of spuds and my lower back ached. As I made it ashore, I saw the 4th female Regina just starting her kayak and I knew I was safe with ten minutes to spare.
The last leg was more of a shuffle than a run and felt like the longest 3k of my life. I was relieved to make it to the finish line in Kenmare and happy to have bagged myself a spot on the podium.
I got a nice warm bowl of soup to regenerate myself. Competitors were still coming in and the atmosphere was typical of a Quest event.. everyone buzzing and bursting to share details of the making and breaking of their races.
I’d like to say a huge well done to the winner of the ladies race Ellen Vitting and to Laura O Driscoll who got second place. They also bagged 7th and 9th place overall. (Watch out guys!!! )Thanks to Ollie and team for a really great day out and with free entry into next year’s event, it looks like I’ll be back for more.
By Ann Horan|2018-03-12T17:06:14+00:00March 12th, 2018|Categories: Race Reports|Tags: Quest Kenmare, Race Review|1 Comment

About the Author: Ann Horan