A fantastic event, a glorious day in Wexford and a post-race BBQ, what else do you want? Actually, the only thing missing were those famous Wexford strawberries, but we’ll forgive the organizers on that one! This race is a must for any Adventure Racer, the 7 steps is well renowned as one of the toughest courses going, while the 5, 3 and 1 steps cater for those ‘less crazy’ amongst us. In simple terms the Blackstairs Adventure Race (BAR) has everything you would want in an event – well organised, helpful and cheerful marshals, enthusiastic supporters, a delicious BBQ (it honestly was that nice I’ve already mentioned twice in the first paragraph!), a real sense of community and just awesome fun.

Two weeks previous to this race I competed in Quest Glendalough, things didn’t go as well as I planned and I felt disappointed as I had put the miles in but my performance felt tired and flat. I hadn’t planned on doing the Blackstairs Adventure race but when the opportunity arose I jumped at it, I needed to assure myself that all the miles weren’t in vain. In the two weeks prior to BAR, I cycled once, ran once and had a bout of strep throat so preparation wasn’t ideal! 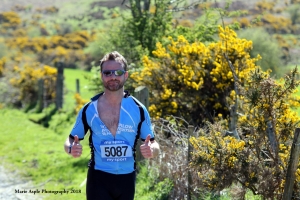 I opted for the 5 steps, 46 km broken down as a 10.5km run, 9km Cycle, 3km Kayak, 23km Cycle and a 500m run into the finish line. Starting off in Rathnure GAA club the first 3km of the race is fairly flat, which is nice as it gives you a bit of time to get your rhythm and find your pace. The roads were lined with local well-wishers shouting encouragement to everyone – great to see and always appreciated. A sharp left around the 3km mark and then the hills kick in! For the next 4.5km you’re climbing non-stop, it’s very runnable but relentless, (250m gain). A special shout out to the race steward who manned the unofficial water stop half way up the mountain – a bit of relief in the tropical weather conditions! Once you’re on the top of the climb then the fun begins – everyone loves a good downhill. That is, until you reach the ‘field’ littered with small boulders and dried bracken – one bad decision and the mountain rescue crew would be called into action. Out of the field and onto a country lane for 1.5km to the bike transition.

The first ‘hill’ out of the transition feels like you’re climbing Alpe D’Heuz – let’s be realistic for a second, there are a few inclines that we’d fly up in training but we all know that feeling as we wait for our legs to adjust from running to cycling. The first 10-15 mins of this section are the hardest, then it’s onto nice smooth flat roads and a nice downhill into the picturesque village of Graiguenamanagh – try and get an American tourist to say that one!

We ditch the bikes, run over the bridge and along the quays (and past people sipping ice cold drinks and tucking into ice-creams – I was tempted to sit down and have one myself). Onwards along the bank of the river to board the single person kayaks. In the majority of races the Kayak sections are short paddles around a couple of buoys, we jump out and off we go. It was refreshing to have a race that has a kayak stage worth talking about. The 3km kayak on the river Barrow was my favourite stage of the race – it was tough going and you could spot the ‘real kayakers’ from those (me included) who just see a kayak on race days. Out we jump and back past the ice cold drinks and ice-creams (still tempting), over the bridge and back on the bike for the final 23km cycle.

Personally I’m amazed how many hills the organisers found on the way back to Rathnure GAA, but credit to them I think they found every single one they could! Having said that, it wasn’t the steepness of the hills but more the long slow drag to the top that was the lung buster, then once you conquered one hill you turn a corner to be faced with yet another hill! Hey look, the only good thing about climbing hills are the descents and the last few kilometres of the race are flat(ish) with a few nice downhill sections. On getting to the last transition you drop the bike and head off on a 500m lap of the pitches – it’s probably the toughest part of the race! Fall over the line, grab the water, suck an orange and think about what you’ve just achieved. Then 5 minutes later you decide to come back next year and put yourself through it all again – yes, we are all that crazy! 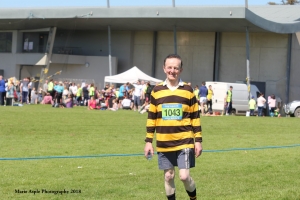 I loved this race, it’s an adventure race and it’s meant to be tough but what I really enjoyed about the day was the ‘feel good’ atmosphere – everyone is a winner and none more so than local man Mickey Foley who at the youthful age of 78 yrs completed the 15km 1 step race. What can you say about a man who took up adventure racing at the age of 72 and since then has completed the 3 steps four times and the 1 step twice. The reception he got when he crossed the line was priceless and if you ever need inspiration to get your ass off the couch then talk to Mickey, #Legend.

On a final note, a huge thank you to all the people involved in organizing and running the event, there are far too many of you to mention. And to all the Adventurers, make sure the Blackstairs Adventure Race is pencilled into the Calendar for 2019 – it’s a must and I promise you won’t be disappointed.

Check out some of the cool race photos courtesy of Marie Asple Photography below.

You can a view all the race photos here
https://www.facebook.com/masple