Here at Kayathlon, we often wax lyrical about an adventure race being more than the actual race itself. Well this weekend we headed for Quest Wales and it certainly didn’t lack in the adventure stakes. The road/boat trip was well, simply put, epic! The following events I’m about to write down…did actually happen! 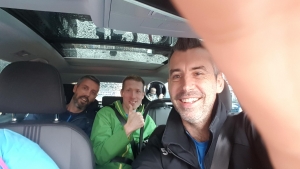 It all started on Thursday afternoon, 24 hours before we were set to set sail to Holyhead. Our fast crossing ferry was cancelled with forecasted rough seas. So, we had to cancel that Irish Ferries sailing and rebook to Stena Line. Both roughly going out the same time, but our ferry was a slower one. Forward 24hrs, we were a crew of 3. My brother John, Barry Cronin and I. John had to make his way from Killaloe but got a flat tyre which he managed to sort but then had engine issue. So, a quick car swap and he was on his way up Kayathlon HQ. Quick transfer of bikes and we headed to the port via the East Link. Low and behold, the bridge was up, and we were left stationary for almost 30 mins. When we eventually got to the port, we had missed our boarding time. Next boat not for another 5 hours. Snookered but what could we do. Then it dawned on us, our van rental pickup in Holyhead would be missed. Unwilling to leave the keys out for us, we had to cancel our Hertz booking.

We had time to kill. Instead of looking at each other’s faces for what would have seemed an eternity, we headed for the Point Village, got a bit to eat and even caught a flick.

Now this is where the awesomeness of the adventure racing community kicks into life. Word soon spread in Betws-y-coed in Wales of our predicament and we were getting offers of people driving over 50 miles after midnight to collect us from the port. Luckily, thanks to Ollie and the Quest crew, we managed to rent a 7-seater from Holyhead all the way to race central in Betws. It was 1:50am before our heads hit the pillows. Although being wired after that ordeal, I didn’t get much sleep.

6:15 in the morning and the hostel was buzzing. Time to get our game faces on!

Shower, breaky, gear up and off we headed on an 8k cycle to the start line. BUUUUUT just as things were looking up, our luck changed for the worst…again. John’s pedal practically snapped off his bike. One piece of luck was it was primarily downhill, so he free wheeled in hope of getting a bike mechanic to have a look. He did…prognosis, bike need a new pedal crank and pedal which he didn’t have. Only hope was renting a bike, which he didn’t have…unless someone in wave 1 or 2 didn’t collect. Wave 1 flew off at a rate of knots…all bikes collected. John was in wave 2. Ollie was calling everyone into the start zone, giving the briefing as we nervously waited. “2 minutes to start”. We found an unclaimed bike in the back of the mechanics van and John went into the start area. “60 seconds to start”. We whipped it out. Had to put new pedals on it “30 seconds to start”. Pedals were on. Bike sorted. It was about a 80-meter dash to the bike collection area. I grabbed the bike and bolted for the transition. “10, 9, 8….” I jumped the barrier, lashed the bike on a railing. “GO! GO!” 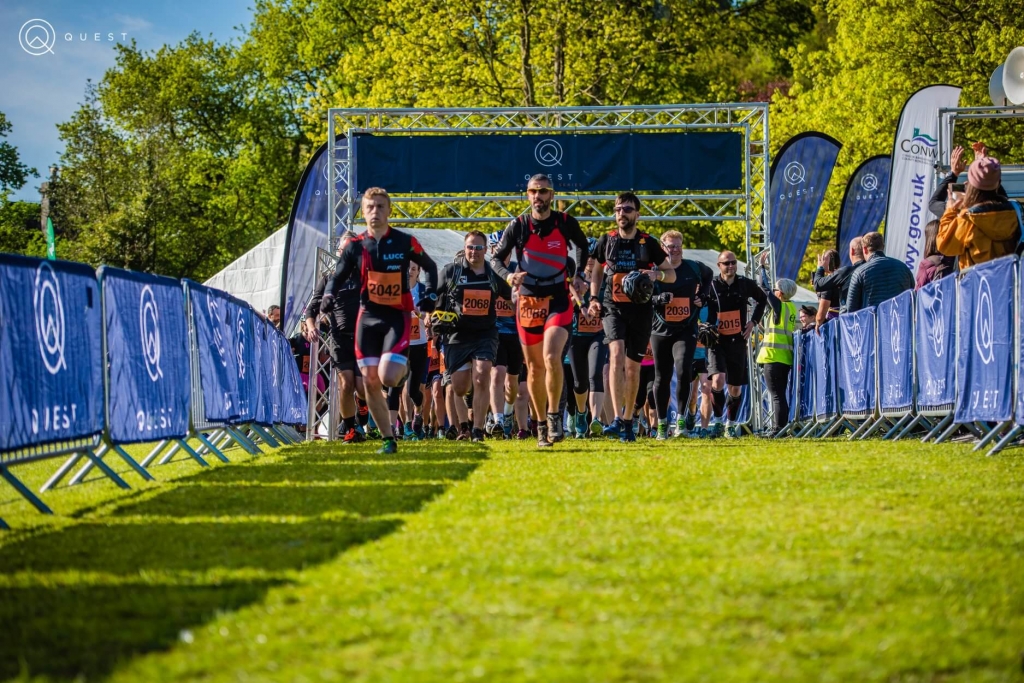 And before I knew it, I was being swarmed my enthusiastic racers, putting on helmets and grabbing bikes. I signaled to John where his new trusty steed was and off he flew into the distance. It was his first race in 2 years, so it would be interesting to see how he got on… Well he won it and set a new course record too! Pints were on me! It was going to be a long trip home.

I was glad I had 45 minutes till my wave as I was taking on the sport route at 9:30am. I found a deckchair, caught my breath and chilled. The sun was beginning to heat up nicely. After a while I began to get myself sorted for the race. Double and triple checked my own bike and kit and headed towards the starting area. I noticed the first of the expert route coming back into transition 1 and clocked it took them roughly 38 mins to do the 6k loop which was either very slow (not likely with these guys) or hilly as hell. As it turned out it was hilly. I was speaking to Mick Fitzgerald of the Cavankayakarun fame in the starting pen and we both copped onto this. He also said had reccee’d some of the course the previous night and there was a section on the 1st cycle that was very tough and said I should save the batteries for that. A piece of advice i will be eternally grateful for. I then spotted Kayathlon’s Ann Horan coming in and she seemed to be moving well. There was a great buzz around and as this is a relatively new sport in the UK, the field was full of hopeful and excited first timers. Great stuff altogether.

With 139 fellow racers, we got our briefing and headed to the hills. The first section was the run. Open road, fire road, through the forestry, over stiles and back to the bikes. It was obvious from the start that there were a lot of first timers as they were making the same mistakes I first made back in the day but I helped and offered advice where I could. A lot of triathlon guys too. They were fast on the flat, but a lot struggled on the technical downhill and especially the mucky, boggier surfaces. There was heavy rain the previous day and it took its toll on certain parts of the course.

Getting to T1, I would say I was about mid table, which is good for me as I’m not the fastest runner in the world. Helmet on, quick drink, dumped the now almost trademark base layer and I was off on this 11k route. Time to make up a little ground but with the expectation of the prophesized hill ahead, I didn’t go full kilter…Thanks be to god I didn’t. The first 5.5k was flat but then turn the corner and 3k of climbing with gradients of 20% in places. I chose my battles and dismounted a few times. No shame in that. I didn’t see anyone make it all the way up to summit. Then it was downhill to the kayak, passing a few on my way.

Bike in, quick drink and hopped into a kayak but had to wait for about 60 seconds for someone to join me. I spotted a Thomond Tri-club kit coming towards me and he happily obliged. We got into a nice rhythm and before we knew it we were heading back to shore where we were greeted by Brian Kehoe and the Total Experience Crew who were providing the great kayak service for the day. This would not be the last time our paths would cross but more about that later.

Quick drink and a nibble and I was off on the 9.5k run around the beautiful lake. This was tough. The total climb was 343m and every turn for the first half of the run seemed to have another hill. As I ambled along at a mesmerizingly slow pace, I began to recognize parts of the course from my race in 2017 where I did the mini 25k route. It was breath taking in places. The scenery would rival any course you find in Ireland. I eventually got back to the bikes after 1hr13min of “running”.

Quick drink and off I went on the bike. I knew this route well from last year. It was the same as the mini route so knew exactly what to expect. A few hills before the mandatory dismount zone of about 500m, then head down and empty the tank to the finish line. I came over the finish line in 3h25m and 50th overall. Delighted with that time. Definite improvement there for next year but overall, I would say this course suited a stronger runner more than a cyclist. And as if you haven’t probably guessed by now, I would class myself as the latter. I was greeted by the extra smiley faced Ann Horan who had came in 3rd in the ladies expert route. Pictured below with her Orwell Cycling Team Mates…Barry Cronin, Luke McMullan, Rosy Temple & Ann Horan. 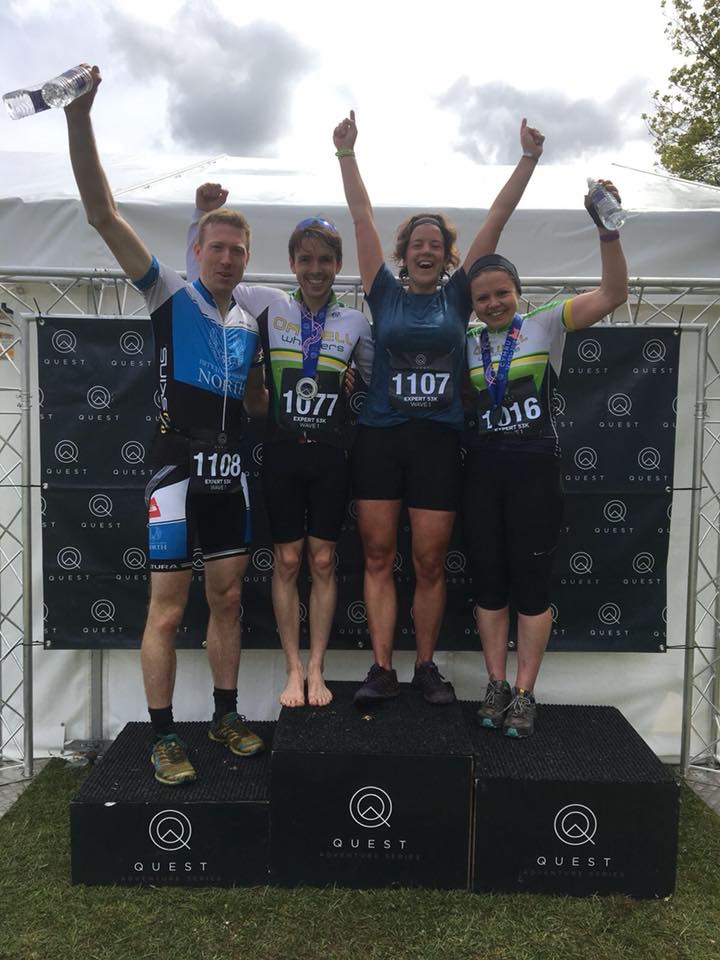 A cracking event overall with the logistical adventures adding to it and I can’t wait to sign up again for next year. If you had played with the idea of coming over this year but didn’t. Well, you should. It’s a great race, the location is an outdoor enthusiasts playgrounds. But wait…hold on. Race done. Medals collected and trophy in my brother’s case, we needed to get back to Holyhead and we didn’t fancy a 80k cycle, especially when one bike only had one functioning pedal. Remember I mentioned Brian Kehoe from Total Experience, well he offered us a lift back no bother whatsoever, but we would have to jump in the back of the van and keep the life jackets company. They truly were life savers!!!