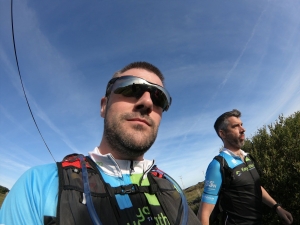 It was 6am. Dave Gowan & I sat on the transfer bus, waiting for it to fill up before we were to head off to the rendez-vous point. We were decked out in the brand new team kit but something wasn’t right. I was having problems with my socks. When I looked down I was wearing to different running style socks. Must have been the early start that heralded this rookie mistake. The OCD kicked in. Without a thought, I hopped up and legged it back to the car. Quick change and back to the bus. Dave’s face said it all when he saw me…yup dirty old football socks, but at least they were matching. Old habits!

During the bus ride, we were keeping an eye on the live tracker for the inaugural Ultra, where team mate Padraig O’Connor was battling his way along the Maamturk mountains and holding his own.

We eventually arrived out at the drop off before Glassilaun beach and were making our way to the start line. An official said that wave 1 was about to start, so we got our warm in by running to the start line on the beach. The safety speech was being given upon our arrival. Quick stretch and wave to a few familiar faces and we were on our way.

We made our way up passed everyone doing wave 2 who were making their way down. By now the top guys were already vanishing in the distance. It wasn’t long before I was joined by Barry Dempsey and we pretty much played cat and mouse all day passing each other on numerous occasions due to different circumstances. Up and down the winding back roads and till we reached the little hill where the majesty of the fjord was awaiting. It blew me away. It was picture postcard perfect. I stopped along the way a couple of times and took a few photos and also to take some liquids on board. I’m not much of a swimmer but I would have loved a dip in it. If you didn’t know, you would think you were in the middle of Scandinavia. It was an awesome sight.

So onto the main road and headed towards the kayak section getting papped by the guys from Clearskiesahead.ie along the way. The temp was in the 20s and it wasn’t even 9am.

Filled up bottle. Powered on with Barry in the kayak. Passed about 5 or 6 kayaks. Great synergy in the boat. As we joked, we must at least be the fastest kayak today. It turns out we weren’t but you gotta dream.

Up and over the boggy 2km and onto the road for a further 2.5k. A lot less heavy compared to last year where I lost my trail shoe twice.
On the second half of the run, I got a tap on the shoulder, “is your name John?”. “No” I replied, “that’s the brother”. I recognized this guy. We went to the same school 25 odd years prior.

Into bike transition, grabbed the gear, filled the bottles and hopped on. And just like last year, I was forced to pull over 5 yards up the road, in the exact same spot. Last year it was jammed chain, this year a flat tyre. I thought there was a possibility the tyre wasn’t right. I took a gamble and lost. It turned out the valve was damaged and as a result was slowly letting the air out. I took the executive decision to pump it, not change the tube and see how it fared. A couple of mins down but was welcome as the temp was rising and my tiring limbs needed the break. I was passed by a few but once back on board I was away feeling a little more refreshed and making up for lost time. I got chatting to this old acquantance who was naturally inquisitive about what lay ahead being his first time. I told him about the last 8k of this leg and we chuckled about it. He, being a strong cyclist pulled away from and I made my way around the meandering roads. I felt a touch of cramp so pulled over and took a PowerBar Magnesium shot which eliminated that in moments. Off I flew until I reached “the dreaded Turn”. I said to a fellow competitor in close proximity, “and know the fun begins”. He promptly replied…”Yep…Misery Lane”. It was dryer than last year which was a major plus but still a lot of people struggled, some picking up flats on the rocky dry road, others dismounting. I could feel the pressure in my tyre had dropped but not a bad thing as it gave me a bit of extra traction.  I dismounted perhaps twice as I could feel the fork headset on my bike was all but gone. But in fairness, they were on their last legs prior to the race. Note to self…get it serviced.  The transition field at the foot of Croagh Patrick came quicker than expected so that was a nice surprise.

Dumped the bike and helmet, filled a bottle. I had already consumed 4 x 650mls of water and Tailwind. It was now hitting the mid to high 20’s according to my watch. I figured I’d be about 1 hour and half up and down and we were rapidly approaching high noon. Just a matter of climbing the 764m summit and back down.

Off I set a staggeringly slow pace. I was greeted in quick succession by fellow Kayathlon Team mates Dave Gowan and Ann Horan on their way down. Both moving very well. At that stage Ann was chasing ladies pole and Dave was doing exceptionally well considering he hadn’t done any running for 8 weeks prior due to a foot injury.

Got to the shoulder on Croagh Patrick and took a moment to re-hydrate and catch a breath. Off I went and could feel a welcomed temperature drop as I ascended. The little white church was a welcomed sight. Usually I would dib in and fly back down but the views were so clear, I thought it rude not to hang around and take it all in. Absolutely beautiful. 360 clear panoramas. A quick stretch and off I went down. I found the descent particularly tough as my knees were beginning to give out, so I gingerly made my way to the shoulder, quick dib and drink and off to the less severe section I bounded, praying for the bike.

Quick pump of the rear tyre and off i flew at a good enough pace passing a few weary souls along the way. Over that tricky 2k section, always a fun section, where unbeknownst to me, Ann Horan whilst chasing pole came a cropper, cracking her forks in half, taking a nasty fall and was forced out. A valiant effort all the same but thankfully she wasn’t seriously injured.

Down onto the main road and about 7k to Westport where I emptied the tank, making about 10 places on the final section. Into the bike area and over the line.

Delighted to have made it home in one piece and knocked off 30 mins off last years time in the process. #happyout.

This event is one that will push you to your limits and beyond if you tackle it head on. Last year it was mixed weather conditions, this year it was hot. I will admit that during the race, I was having seconds thoughts about what the hell I was doing there, had I done enough training, the usual doubts and fears that kick in when the going gets tough. When I crossed the line, they all vanished and were instantly replaced by feelings of joy and elation. Will sign up again for next year…IN A HEART BEAT! 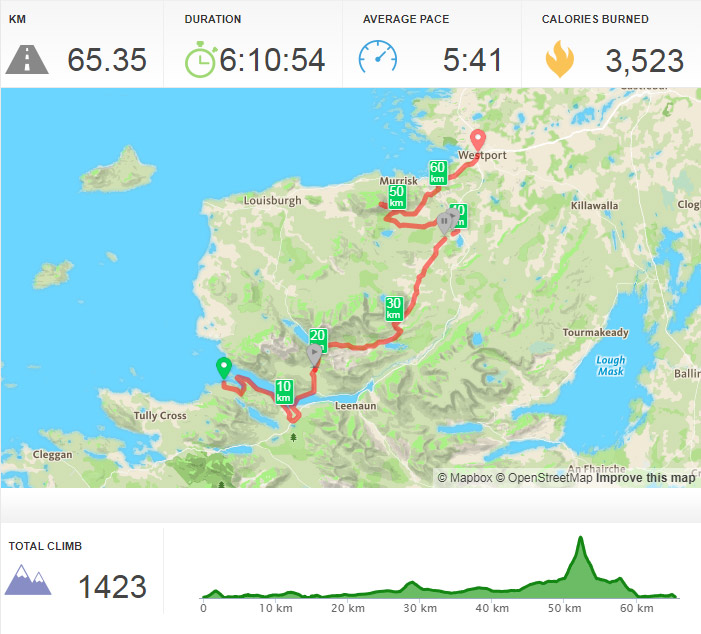