It was Autumn of 2017 and rumours began to trickle through that something big was coming from the Quest Adventure ranks. Naturally social media and whatsapp groups began to fill with questions and speculations of what it could be.

THE BIG ANNOUNCEMENT
When the details were released, the battle hardened jumped to attention and it started. An unsupported 12hr & 24hr race, 146km & 253km race around the spectacular kingdom of Kerry. Although final routes were not set in stone, the only question was not would I, but which one? On the surface of it, you could be forgiven for thinking the longer distance would be more difficult but they hold 2 very seperate challenges.

The longer route will require a different type of endurance in comparison to the shorter one. It is believed, and after much debate, that the shorter race will be tougher to finish within the “given” window. Whilst you will still get a finishers medal once you cross the line, the competitive side of most entrants will be firmly focused on finishing under 12 hours or 24 hours. 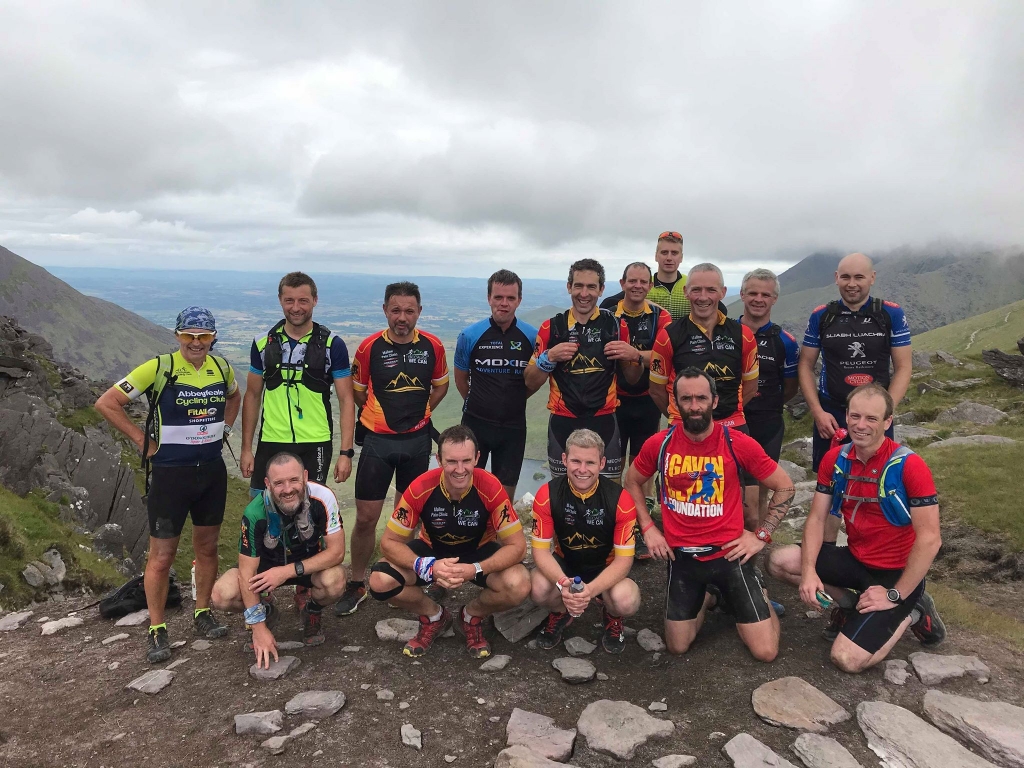 THE 146K ROUTE
Both distances will leave the former tidy town winning village of Sneem at 6am and head to the base of Carrauntoohill by bike. A 47.7km cycle with some serious climbs where transition boxes will be waiting.
Stage 2 will be up the Devils Ladder which is a 12.9k mountain run/trek/scramble or whatever it takes to Ireland’s highest point and back down in one piece to the bikes again.
Stage 3 will be back on the bike for another 48k cycle to Waterville. Again, a few nice hills thrown in for good measure.
Stage 4: This is a 5k kayak around the tranquil Lough Currance. A well needed leg rest after the previous 3 stages. Back on the bike for another 14k cycle by the home of the Liberator, Daniel O’Connell, Derrynane and onto Catherdaniel. And here is the kicker…the final stage is an 18km trail run back to Sneem where you will encounter some tough terrain. When you break this race down, your 12 hours will get eaten up quicker than a burger at the finish line. It’s estimated the total climb is circa 8200ft and speaking of eating, you will burn off about 12,000 calories in the process. 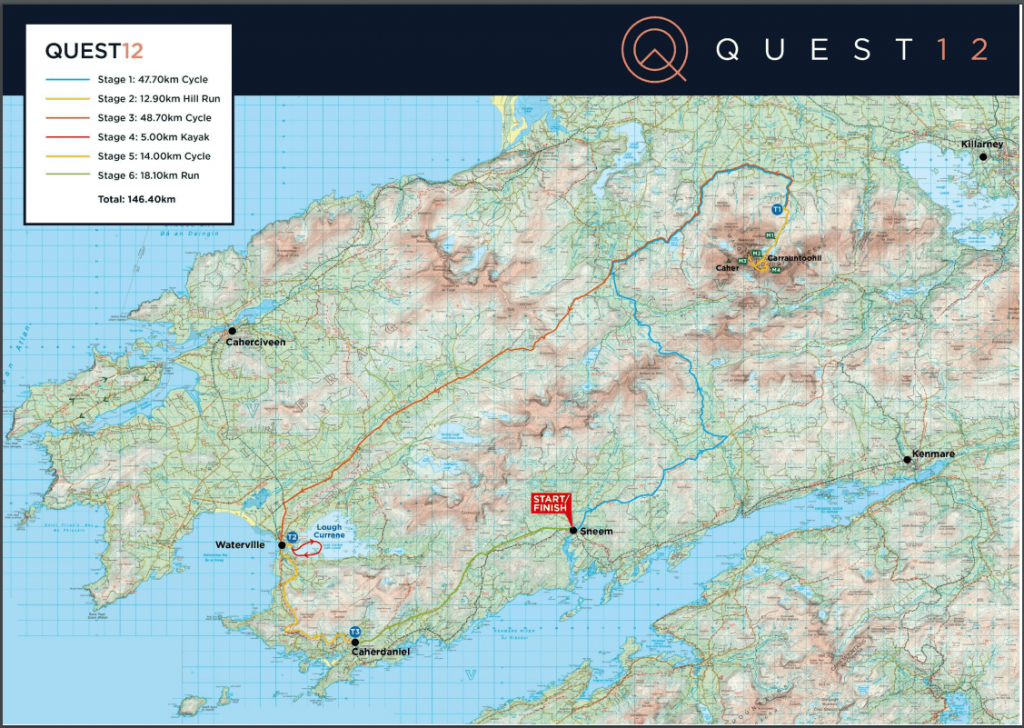 THE 253K ROUTE
Like we have alluded to, these races are very different. We believe the 12 hour will test your speed endurance, where the 24 will test your distance endurance.
The first stage, although starting with the 146k gang, will be a 80k cycle to the base of Carrauntoohil but then on the second cycle you will head straight onto Cahirciveen around Valentia Island, through Ballinskelligs and join back at the home of Mick O’Dywer in Waterville for a 12k kayak. Having cycled some of this leg, there are some wicked hills to tackle. Especially between Ballinskelligs and the Glen with the majestic Skilligs looking on. This is a 113km cycle.

If your legs haven’t seized up after the kayak, there is a 35k trail run back to Sneem just to top it off which depending how far along you are, will most likely result in tackling this in the dark with headlamps a blazin’. 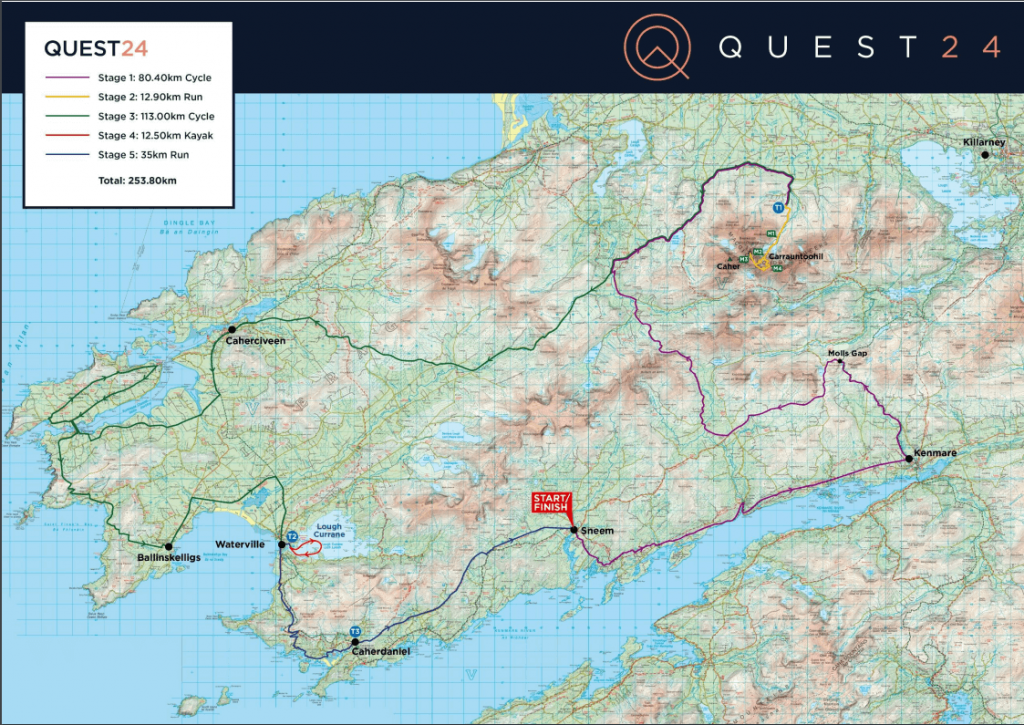 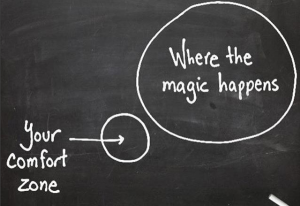 This event will introduce a lot of newcomers to the world of ultra adventure racing and we expect many will pass this test with flying colours, but for others, they are about to embark a whole new level of endurance where they will be pushed so far outside their comfort zone. They will discover new strengths that they never knew they possessed.

Speaking to Padraig O’Connor, he has warned those new to endurance, that nutrition is so vital and to keep on top of it. You’ll need the right fuel to keep you truckin’. Keep an eye out for our post about Ultra race nutrition.

As ever, the Kayathlon crew will be taking part. Hopefully see you there.