The scene was set. The months of prep were done. Nutrition was dialed in. It was time. Time to step up to the next level. Quest Adventure Series had announced back in 2017 that they were upping the ante. There were calls from the more seasoned adventure racer that they wanted something bigger, tougher, harder. Well Quest didn’t let the side down. They announced 2 races, a 12 hour 146k & a 24 hour 253k race around the Kerry way.

Training had to be upped. Longer sessions, further distances, higher climbs. We had roughly 10 months to prepare for. Unlike the rest of kayathlon crew, I was a newbie to the world of Ultra. It was a massive step up as I preferred the sport distances and the odd expert route.

REGISTRATION/BRIEF
We arrived down to Sneem Hotel for registration and the pre-race brief. There had been a lot of chat, Chinese whispers though different forums and WhatsApp groups about this and that, which were laid to rest at the brief. I have been a big advocate of such briefings, especially because of a race of this magnitude. There were so many variables. Brief over, transition boxes packed off, time for a quick bite to eat and hopefully get a few hours shut eye. But will have to admit not too much was had. Check out my Pre-Race Blog that pretty much confirmed this!

RACE DAY
6am and the 24hour races were gone on there way. 6:30 for us 12 hour racers. Although there was a mass of experienced Adventure racers here, like myself, a lot of very nervous faces as this Ultra racing malarkey was new territory. 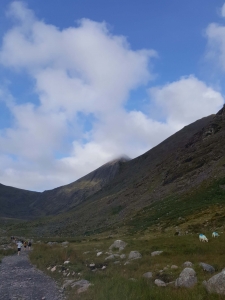 Like a bolt, the podium chasers shot off, and before long were gone out of sight. I was warned over and over to race my own race, go at my pace. It was going to be a long day. Probably one of the hardest things for first timers as the natural inclination would be to floor it. It was a game of mathematics to get you over the finish line in one piece. Keep ahead of the hunger and thirst. So eating and drinking was a challenge within itself. The cycle was 48km to Carrauntoohil(The Devils Ladder route). It was a cold start to the morning. Opting not to wear gloves, for the first 10km was a knuckle tingling decision, but the forecast was good for the day and it wasn’t long before everyone was shedding layers as soon as the sun began to rise. This was a lovely cycle with a few challenging hills along the way to get the blood pumping. A few bike issues were causing time and effort, so had to dump the pedal cages just before the climb at Ballaghbeama Gap. Up and over the hill and Carrauntoohil here I come.

After getting myself sorted in T1, I made my way along the trail to the base of the climb. All feet and hands needed on this. 4 wheel drive up. Got to the shoulder and stopped to see the view behind me. 700+ meters high. The sun was shinning. It was amazing. A quick turn right and up the final climb to the cross. The clouds had now cleared and the panoramic was indescribable. I only wished I could have stayed up there for longer.

DEEP BURN
I began to make my descent and I was moving well, came to the zigzag trail which traversed down the side of the mountain and within a few minutes, my quads started burning up. It just seemed to go on and on. Time to walk it. Save the batteries. Got to the base and gingerly began to make my way back the 4km passage to the car park. Quick calorie intake and off I went again. 47km to Waterville. 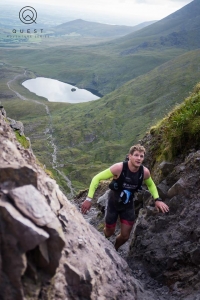 I found this was a particularly lonely cycle. There were strong plain winds to contend with. Bar a handful of people I passed, I was on my own. Alone with my thoughts, trying to occupy my mind with anything but negative thoughts. I got to Ballaghisheen Pass. Had a pop at it but jumped off as I began to hyperventilate, remembering what I was told. Further on, about an hour later, never have I been so happy to see a road sign “Waterville 14km”. That renewed the energy in my legs and I pressed on to the kayak where I met our own Padraig O’Connor who was helping out in the car park. The usual slagging match and off I went. 3 Down, 3 to Go.

The kayak currents were strong from the off, cutting straight across the boat so it was a one sided paddling all the way and the opposite on the back. 2 laps and done. I was greeted by my cousins and again #TeamComerford who were full of words of encouragement and enthusiasm. It was infectious.

A short 14km bike ride along the stunning coast line to Catherdaniel. I made sure to stop and take as much as I could in. I made my way to the community center where I was welcomed by the high spirited helpers. I had an 18km trail run ahead of me. This was the section I was dreading from the off but I felt great. Quick change of clothing. Bite to eat and then I pulled out my secret weapon. My tooth brush. Heaven! From about 10 hours of shoving god knows what into my mouth, it was just what the doctor ordered. 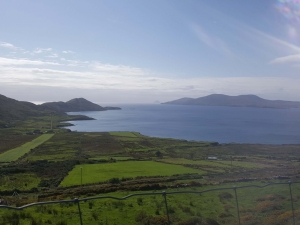 The trail was great. Km after Km were quickly being chalked off. It seemed that every 20 yards there was a little luminous flag guiding us on our way. A couple of nice climbs thrown in for good measure. I couldn’t get over it when I looked at my watch and there was only 8 km to go. The realization that I was actually going to do it.

PANIC!
I came off the trail and began to enter the town. I saw the iron cast model of John Egan, the Kerry footballing legend. Panic set in. In my head, I was to enter the far end of the town. Had I missed a turn off and added an extra few Km to my race? But a steward caught this panic stricken runner and ushered me in the direction of a side street. And breath…for now…

ONE FINAL TWIST!
Now the next section is a bit bizarre. It was as if Quest did it on purpose just to mess your head and just when you thought you were home, you came across this twist. It’s hard to describe, but you enter a densely wooded area with no markings. You can here the music at the finish line but cannot see it. Panic sets in again. So close yet so far. The rest of the race was so well marked, you have become dependent on those little yellow flags. Eventually, after a minute or two you will find your way out.

Never have I been so happy to finish a race. It’s almost indescribable the feeling of accomplishment. No, I didn’t complete it in 12 hours but I completed it. And like many with me, that was the main aim. Anything else was a bonus. Everything about the race was right. The organization. The course markings. The transition help. The weather and above all, the comaraderie between fellow competitors.

NEW TARGET!
August 31st 2019. That’s the date of the race next year. My advice…Put your name down for it. It was top class. Even almost 2 weeks after the race and I’m still on a high. Next year, I’ll be back. To break the 12. 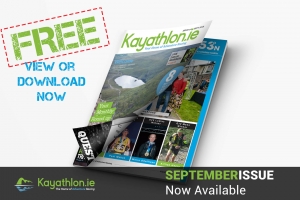