Our next competitor to go under the spotlight has an amazing backstory. Matt Casey shows us that having a “Because We Can” attitude, anything is possible. Read his inspiring story from one crash too many to podium.

WHERE ARE YOU FROM:
Born in Limerick.
Reared in Kilkenny.
Live in Cork.

THERE IS HARDLY AN ADVENTURE RACE GOES BY WHERE A BLACK AND RED ” BECAUSE WE CAN” JERSEY WON’T BE SPOTTED. YOU ARE PART OF THIS BATTLE-HARDENED CREW. CAN YOU TELL US A LITTLE ABOUT THEM?
Where to start – in fairness we are racing since 2014 but I guess we became visible in 2016 when we debuted our distinctive jersey and stepped it up a notch. We do the adventure races- because we can. The origins of the group are a gym class I hold, where I put people through their paces on cardio machines and involves weight circuits. The aim is to train every part of the body. we do gym twice a week during the winter and once a week during the summer. As a system it works well as it allows a complete beginner train alongside the best in the group. Not all the gym class do adventure racing, we have some cyclists and runners from local clubs who haven’t seen the light yet. Outside of gym we try to get out to the mountains together every weekend. 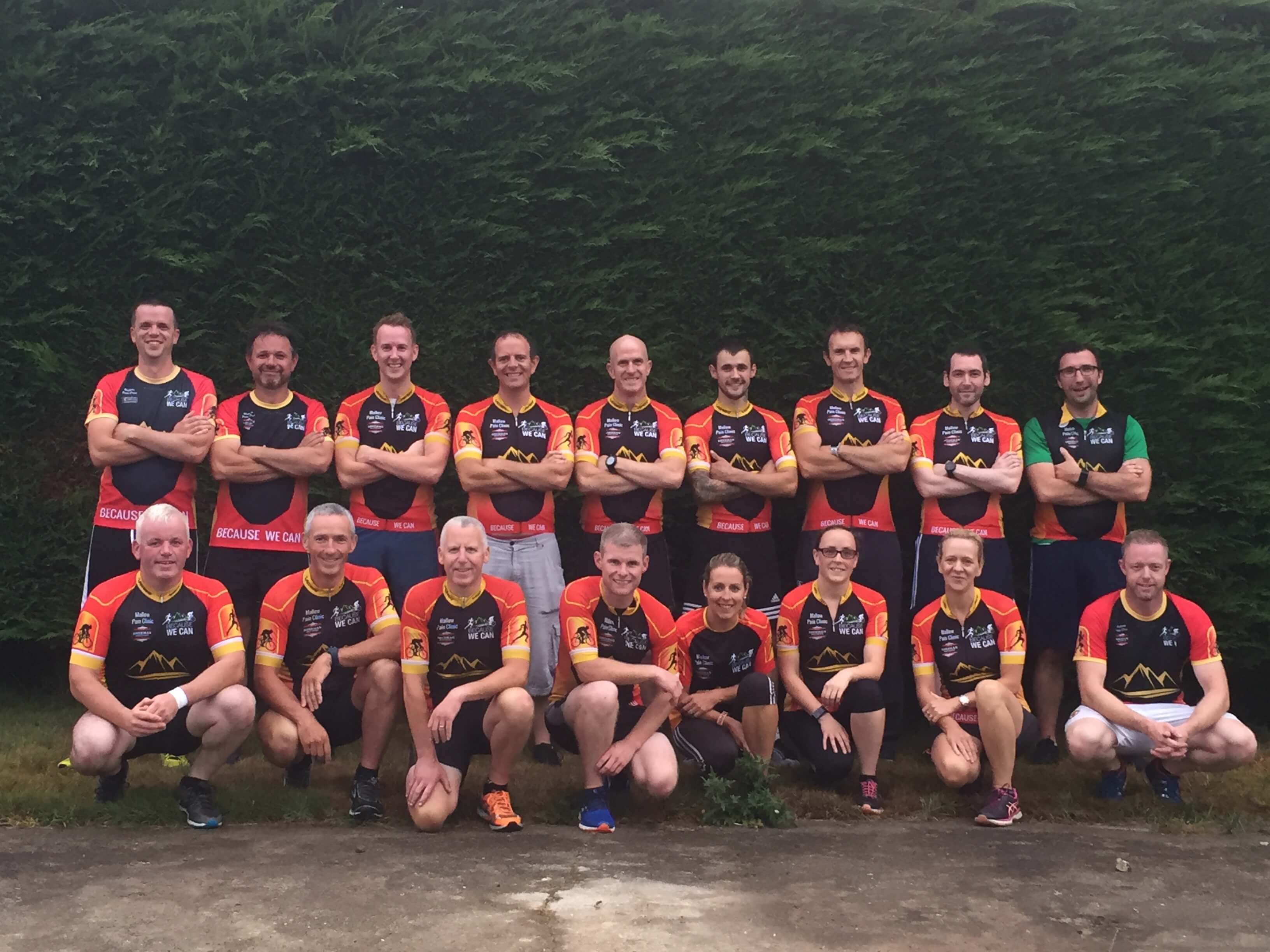 “Because We Can” consists of 20 men and women from various backgrounds and with ages ranging from mid-twenties to late forties. They train hard and push
and encourage each other along the way. Most us are married with kids – as such time constraints can have a bearing on how well and how much we train. So, when we go out to play, we play hard and have fun. Over the last two seasons we have gone from strength to strength, culminating in our best day out to-date in Dingle Sport 2018 where we had 5 placed in the top 13. Individually we are going quite well also – I have managed a few podia finishes in the last few seasons, Maria Keating hit the podium in the knockmealdown in 2017. Earlier this year Dave Sheehan made his podium debut in the Blackstairs Adventure Race. Gary Lawlor also made the break through this year and claimed the title in Glendalough Sport and added a podium in Dingle. Our top and most consistent performer is Gina Sheehan who has amassed an impressive selection of victories and podia over the last few seasons. My role within the group is to have everyone ready for race-day and treat any injuries that may arise (thankfully these have been few).

WE SEE YOU ARE ALSO ASSOCIATED WITH THE PAIN CLINIC. CAN YOU TELL US MORE ABOUT THAT?
The Mallow Pain Clinic is the business name of my wife (Trish) and I. It is in the Mallow Primary Healthcare center. There I practice Physical Therapy / Neuromuscular Therapy, Deep Tissue Massage and Dry Needling and Trish practices Acupuncture and Craniosacral Therapy.
We treat all kinds of ailments – ranging from soft tissue injuries, sport injuries, joint pain, Sciatica, Migraine/Headaches/Sinusitis to name just a few.
We can be found on Facebook.

TELL US ABOUT YOUR JOURNEY INTO ADVENTURE RACING?
I am one of the unlikeliest adventure racers you are going to meet…
In the late 1990’s I had finished my so-called Gaa career as a Junior B hurler, generally enjoying life – drinking, smoking and doing nothing with myself.
I was involved in a road traffic accident which turned out to be one crash too many (had a few). I was left in a bad way – no broken bones but a lot of soft tissue injuries to my neck, back and pelvis. If I was in-active before the crash, now I was immobile, and the weight started to rise. After a few years, it was obvious that I would not be returning to farm management and after spending a lot on treatments to get myself sorted – I signed up to do a Neuromuscular /Physical Therapy course with the NTC in Cork to help myself. Thankfully I have never looked back, as I received plenty of treatments from the Tutors and Students of the course. The only downside was that by the time I qualified – I had hit eighteen stone. 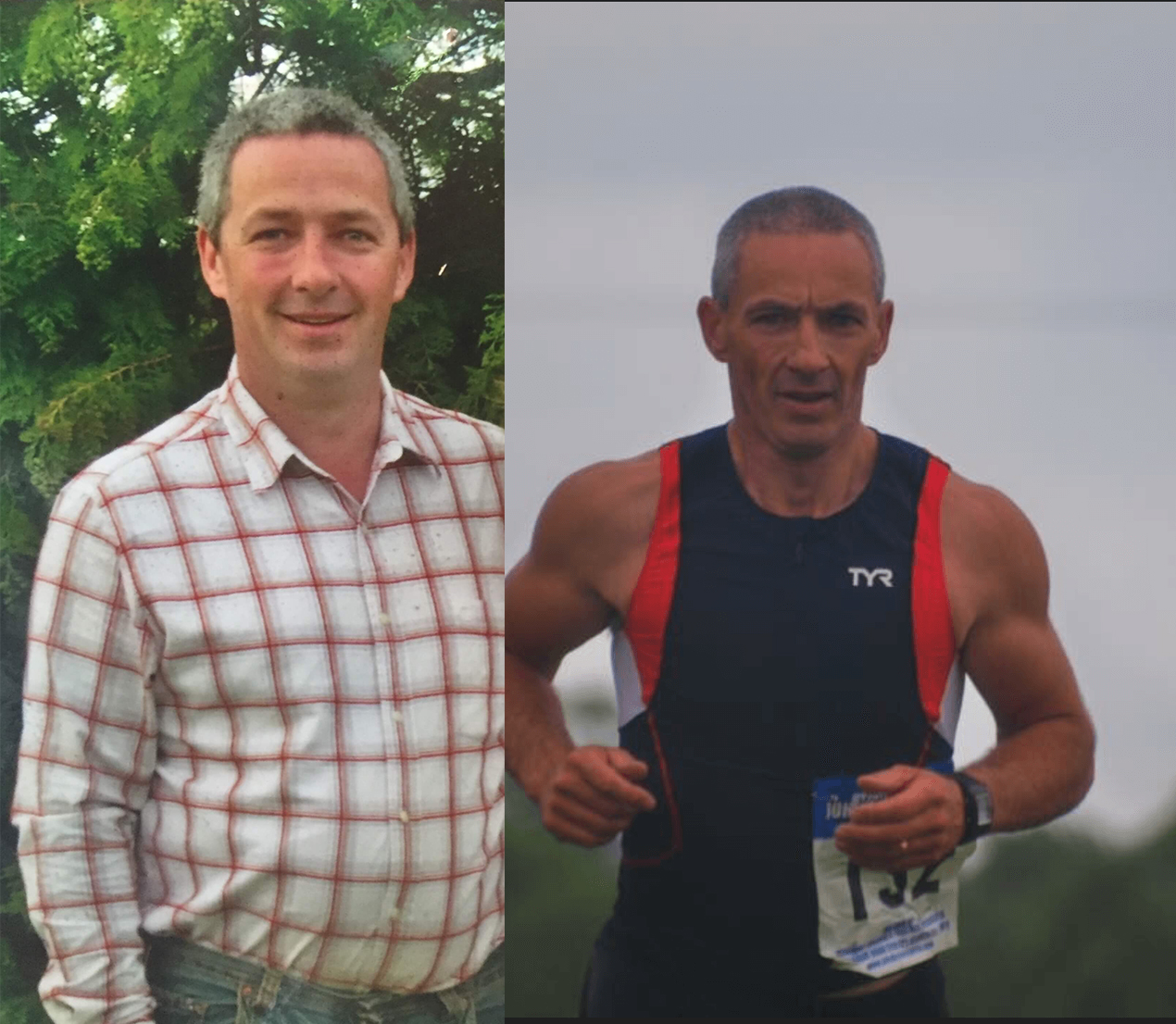 I decided to qualify as a gym instructor / personal trainer and my training started in earnest. I purchased a small elliptical (crosstrainer) and off I went – the first time I got on it – I lasted 1.5 minutes. It was a case of exercise for a few weeks, body break down, stop for a month or two and go again. Unfortunately, my
elliptical was held together with rivets which were not able for my weight and I had to drill through the frame and used haybarn bolts to hold it together (that machine knocked a stone off me). It was a long slow process, but each year I was better than the previous year. In 2009 the bike to work scheme came in and
I picked up a second-hand bike (Giant OCR I think) which allowed me out of the gym (running was not an option as it aggravated my back etc. too much). The freedom of the bike was amazing, but it still took a few years to get to the level of enjoying the bike and being able to get down on the drops. Every year I was getting fitter, stronger and faster. My set-backs became less frequent. Now I was able to measure my improvement by timing myself on the bike and I’ve been chasing the clock ever since!!

WHAT WAS YOUR FIRST RACE?
In 2013 I heard of an adventure race in Millstreet called “Monster Mac”.
I was involved with training a local Tug of War team “Cuan Rithe” and was training a group in the gym. We decided to have a crack at Monster Mac as it was only 20 km from Mallow. 12 of us took part and I came a respectable 39th – 45 odd minutes behind Jerry o Sullivan in first place. My abiding memory is of me perishing on a cold April’s day hanging on to the side of my kayak as some of my gym class wet themselves laughing as they paddled by. But the bug had bitten.

FAVORITE RACE?
Killarney in October, the route, the scenery, the atmosphere is brilliant.
We’ve used this race for fundraising for The Alzheimer’s Daycare in Mallow, another year we used it to fundraise for Marymount Hospice in Cork.
Plus, it’s normally the last one of the year where the whole “Because We Can” crew race – (so bragging rights for the winter are at stake).

HOW MANY RACES HAVE YOU DONE?
Around 25 in total.

IF YOU COULD DESIGN YOUR OWN RACE, WHAT WOULD YOU DO?
It would have as little road running as possible, the cycle would have some nasty long climbs and the kayak would be short.

WITH QUEST 12/24 LOOMING ON THE HORIZON, HOW ARE YOU COMING ALONG WITH YOUR PREPARATION?
I think my training is coming along nicely. Breaking new ground on this one, Quest 12 is a whole new ball game – I’m used to giving it my all for 2-3hrs so 12 hours is a big jump. I attended the recce day with Ollie and Padraig a few weeks back and found it very useful. There are so many things to consider in getting ready for this one. Finding the hours to put in some big blocks of training is proving difficult. The weather is glorious, but the heat can be punishing. The farther I get into the training the more I realize that hydration and nutrition are probably the biggest issues that competitors will face. I’m keeping Trish busy
with my requests for treatments. Hopefully I will have the work done and be ready to race come Aug 25th.

ARE THERE ANY ASPECTS OF THE RACE YOU ARE NOT LOOKING FORWARD TO?
It is a beautiful, tough course. I hope we don’t get wintery weather after all this sunshine. I’d prefer to not have a 18km run to finish with – but c’est la vie. 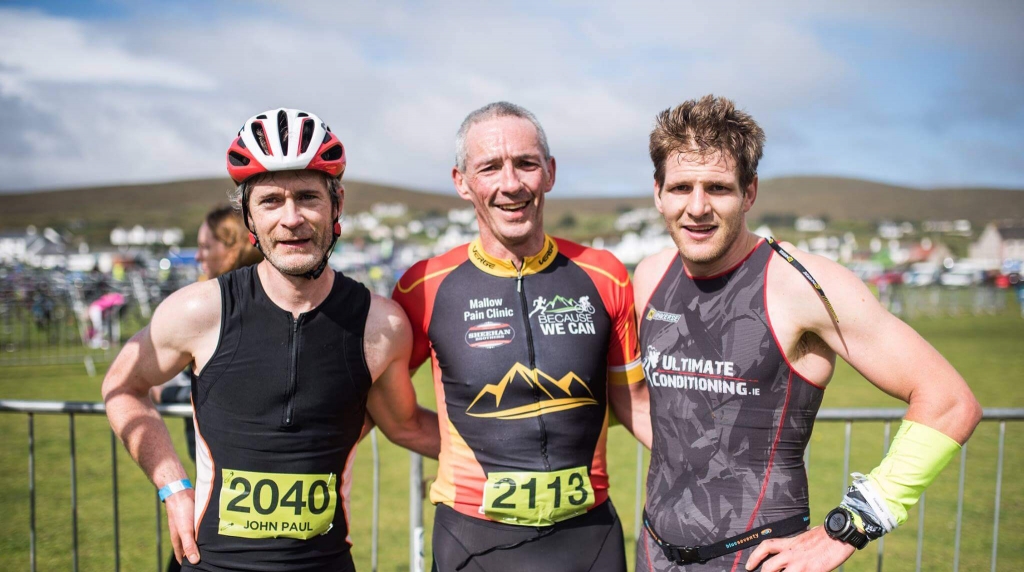 RUNNER OF CHOICE?
Innov8 or Brooks – depending on terrain.

BIKE OF CHOICE?
I have a Giant TCR – she’s a very fast bike but can be harsh on the body.

TELL US ABOUT A TYPICAL WEEK TRAINING?
I train most days, I like to train early in the morning as my nights can be taken up with work. Most of my training is done on the machines in the gym. I do the weights 2-3 times a week. I pretty much do what the Because We Can crew do that week. I like to keep it varied. If I find myself with time on my hands I hit the mountain roads on my bike.

YOU ARE A REGULAR ON THE PODIUM. WHAT IS YOUR SECRET TO STAYING ON TOP OF YOUR GAME AND ULTIMATELY ON THE PODIUM?
Since I started in 2013, the only aim I had at the start of any season was to improve on the previous year. I have been very lucky in that has been achieved, resulting in podium finishes. Over the years I’ve improved my diet and two years ago I gave up the cigarettes (have to admit to occasional slip) I have been even luckier to have found myself surrounded by some of the hardest working and driven people I know – in Because We Can. Plus – my wife has played a huge part with the combination of acupuncture, craniosacral therapy and deep tissue massage which has greatly helped with my training and recovery from injuries/niggles.

WEEK LEADING UP TO A RACE…WHAT DO YOU DO?
Early in week I check I have everything I need for the race – the bike and nutrition side of things. I train as normal until Wednesday, then ease off. I put an effort into eating well and clean for the week.

MORNING OF A RACE…WHAT DO YOU DO?
Breakfast of porridge and some fruit, maybe a coffee before the race and off I go..

POST RACE…DO YOU SPOIL YOURSELF?
Definitely – plenty of chocolate and coke. The first time I won a prize I treated my girls to Kentucky (local chipper). So now the first question I’m asked when I touch base after a race is “are we Kentuckying tonight?”

OF THE 3 DISCIPLINES, WHICH WOULD YOU CONSIDER YOUR STRONGEST?
The bike is my strongest by far. I’ve started doing a little bit of road running so maybe……- still aiming to improve.

ANY BUGBEARS?
Races with crappy signage and stewards not in position in time.

ADVICE FOR BEGINNERS?
Do it with a friend/friends. Take your time and enjoy. Get some training in before the race. Especially for the change-overs they ARE going to hurt. Always carry some liquid and your favorite bar. Here’s a few things to expect. Expect to hurt, expect to laugh, expect great views, expect to make friends, expect to question your sanity, expect the bug to bite AND expect to be back. WHY – Because You Can!!!