Into the West with Gaelforce

Home/magazine extract, Race Previews/Into the West with Gaelforce
Previous Next

Into the West with Gaelforce

The conversation usually goes like this, being asked for the millionth time…..
Everybody: “Oh you do triathlons?”
Me: “No, I can’t swim….I do adventure races (cue puzzled looks)…running, cycling and kayaking, it’s off-road stuff, usually a mountain involved….”
Everybody: “Oh like Gaelforce!!”
Me: “Yes….they’re the ones”…

So 2019 sees the welcome return of Gaelforce West to the Continental National Adventure Race Series. Competitors competing in GFW on 22nd June will earn points towards the Expert Category of the Series.

Gaelforce is one of the most recognized brands in Irish sport, since its inception it has been synonymous with Adventure Racing in Ireland. Gaelforce West first began in 2006 when Jamie Young, renowned adventurer and Director of Killary Adventure Company had a dream to bring a one-day adventure race to Connemara. Supported by Bord Fáilte, Gaelforce West was born and adventure racing in Ireland began to gain exposure and is now possibly the fastest growing sport in the country.

Gaelforce West is a one day multisport adventure race with three different disciplines; Mountain running, Kayaking and Cycling. It is a 68km race which takes the winners around three and a half hours to complete and those walking the course up to ten hours to complete. It encompasses the famine trail along Killary Fjord, the Sheffrey pass and Croagh Patrick as the competitors travel a point to point course from Glassilaun beach in County Galway to Westport in Mayo.
Everyone has their own Gaelforce experience, it’s like a rite of passage, a must have on the cv of an adventure racer, over 30,000 people have made the Gaelforce West journey over the last 14 years. If you haven’t done it then it’s either on your to do list or else it should be. The roll of honor from the records of GFW reads like a who’s who of Irish Adventure Racing – to win this race you need to be the best, there’s never been a ‘handy win’….the top spot at GFW is hard earned and well deserved and anyone who has won this race relishes this victory!

One of the unique elements of GFW is the layout of the course…a point to point course, there’s butterflies in the stomach as you are dropped at the remote start line on Glassilaun Beach, the only way you are getting back to Westport and the finish line is under your own power, there’s no shortcuts, your adventure is just beginning. And what an adventure it is! The day starts in Westport as you nervously join the hundreds of fellow competitors to board the bus to the start line, spending the journey chatting about the plans and strategy whether that’s to shoot for a podium spot or just get around the course in one piece! Bananas and energy bars are eaten on the bus as days of missed training are cursed and attempts are made to use red bull and monster to make up for long cycles that didn’t happen and runs that were cut short and Saturday nights that were too late.

Off the bus and it’s a rush down the road for the portaloos…too slow getting there and it’s a queue and decisions to wait or head for the nature loos! 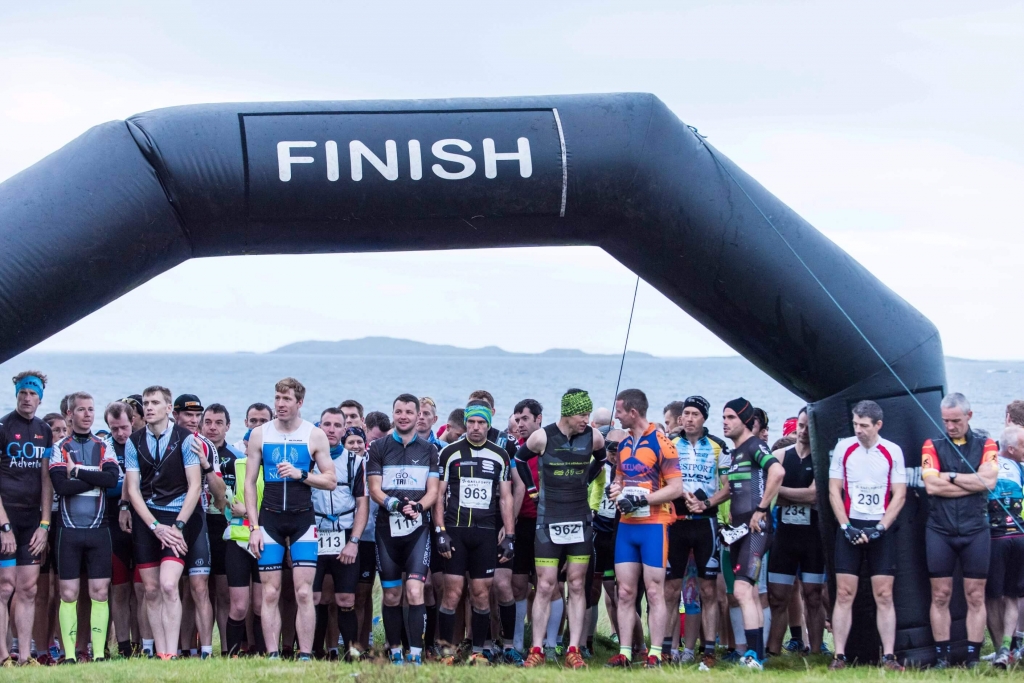 The start line on the beach is stunning, hard to take it all in with the nerves rattling but soon enough Shane or Mona has the briefing done and you’re off. The mad dash at the start lasts about 30 seconds and the hills appear and the doubts appear and the panic appears as the faster guys and gals trot merrily along and the legs start to burn before you’ve even gone 1km. A short downhill restores the calm a bit and then it’s head down and make your way along the famine greenway towards Killary….on a clear day here the views alone are worth be entry fee…and on to the kayak and a temporary respite for the legs. The fjord crossing can be choppy but it’s short and hitting the boggy 3k run along Delphi to the bike drop can make you wish you were back on board the kayak! It’s usually mixed feelings picking up the bike, glad the last run is over, the bog induced cramping is subsiding, memories of being eaten by midges dropping the bike the evening before are mixed with the anticipation of getting going faster, getting back to Westport, getting closer to Croagh Patrick and hitting the Sheffrey Pass after 10k! Rolling road after that until the infamous bog road….prayers have been said on this stretch, tears have been shed, bikes have been carried, curses have been swore that can be heard as far away as Galway City, many a time goal or podium spot has been made or broken here…petitions have being formed to rename this stretch GatorSkin Avenue….but this is what makes Adventure Racing so special, the uncertainty, the unexpected, questioning of the gods are favoring you, the feeling that every time you take this on you may have a different outcome, it’s all part of what makes this race so special, it’s the topic of pre race conversation, will I use the gravel or mountain bike, what tyres have you on, how many tubes do I need, should I just go flat out or take my time, and the topic of post race conversation, Jesus I was flying until then, 2 feckin punctures, I made up loads of ground here, I passed loads of people, my poor carbon wheels, that was savage!!! 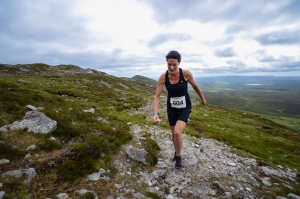 On to Croagh Patrick and another battering for the legs. You are either racing or you are not, if you are then it’s head down, hands on quads and power your way to the top, for the majority of us it’s a hike, on a clear day we get to admire the views, we mingle with the pilgrims who marvel at our determination and question our sanity. For some it’s their first time up this holy hill, for others it’s just another time this year and won’t be the last. It’s always an achievement to get to the top of the cone but more so when you consider the journey you have taken to get here this time. For the leaders and the podium spots contenders this represents the chance to make up some placings or to not lose some placings, their gameplay strategy is put in to place here and they are hoping they have it in the legs, lungs and head to execute their plans and push the pace, climb that bit faster, drop the guy or girl on their shoulder and see if anyone else is suffering as much as they are…and hope their competitor has already been to the well and has already entered the burning quads zone and won’t be able to respond to their kick on. Peter O’Farrell who is the most decorated Gaelforce West’er ever, had this as his hunting ground, a cagey racer, he usually held his powder dry in the early race stages until he got here and then turned the screw and pushed for home!

If you aren’t racing for a podium spot then there is nothing more special on a clear day to take a minute or 2 at the top and take in the views over Clew Bay, it’s spectacular. We all do Adventure Racing for our own reasons and all those reasons are equally right…as far as you can get from an elitist sport, Adventure Racing is all about the people, the places, the challenges, the beautiful country we live in, the podium spots, the personal achievements, the camaraderie, the craic, the medal, the T-shirt, the after party, the just getting away for the weekend….and Gaelforce West offers the opportunity for everyone to find their reason and to meet whatever goal it is they have set themselves…the opportunity to climb this amazing mountain as part of your own adventure or your own pilgrimage from Glassilaun to Westport is special. Soak in the views while you can!

Turning at the top of Croagh Patrick there are many feelings, relief the climb is over, panic at the idea of the rapid descend, determination to push hard and secure that top 3 finish, excitement at the hike down, awe at the magnificent scenery that greets you, empty the tank and head for home!! 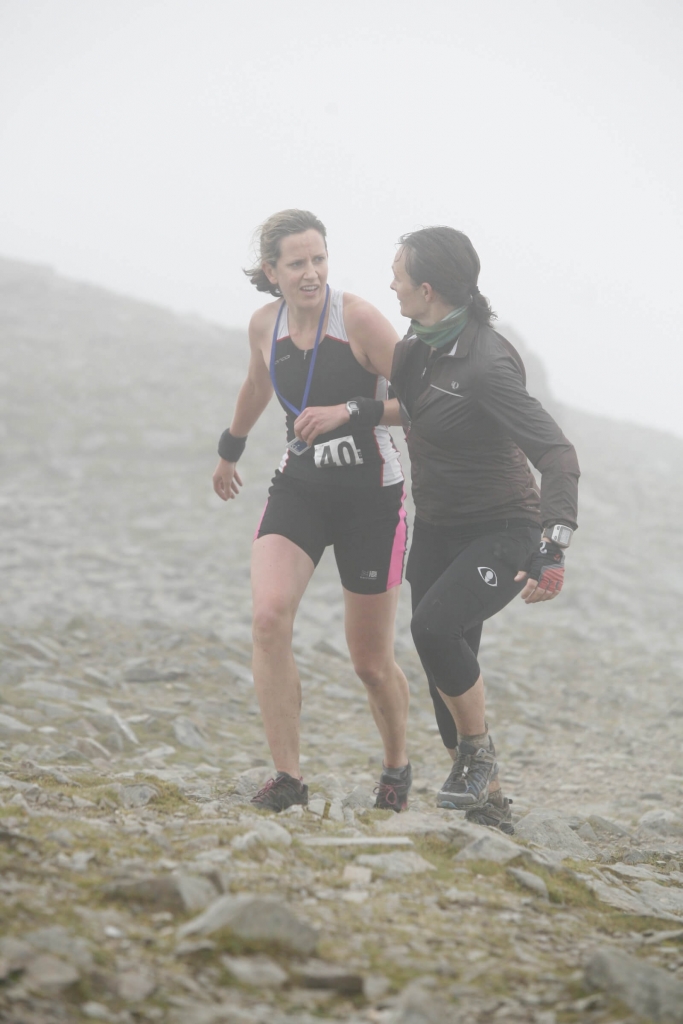 As you descend, you meet fellow competitors not their way up…their faces searching yours for signs of hope, begging you to tell them that they are nearly there, that the worst is over, that the top is close, that the burning will stop…all it takes is a quick smile, a small “keep going you are doing deadly”and they get a new burst of  energy and a new surge toward the top…the feeling you have helped someone on their journey spurs you on as well as you skip on down the hill and on to the bike one more time for the last cycle section back in to Westport. 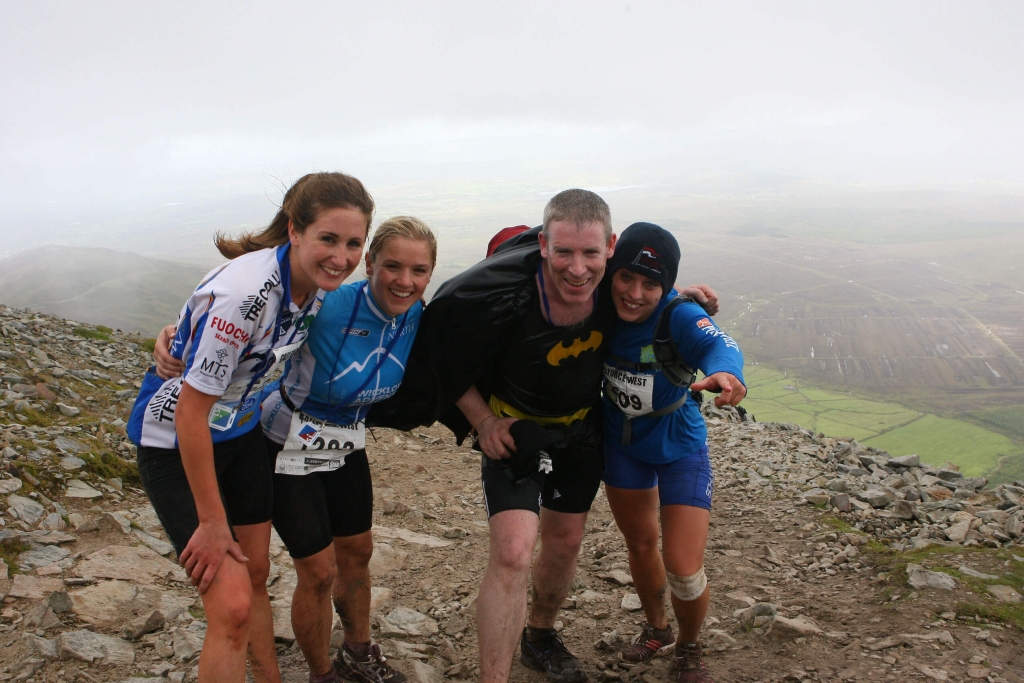 Although no longer part of the course, there was a sting in the tail, past GFW participants will be well familiar with The Skelp, for the first timers it was a character building experience. Decisions need to be made, attempt to cycle through the stones and rocks and pitfalls this crazy little 300m brings or dismount and run with or carry your bike to safety on the other side…many the battle that has been won or lost in this section and more often than not you’ll vow to “do it differently the next time”. The last of the natural terrain over it’s a give it all you got left on the spin back in to town, your journey is nearly over, relief when you see the Westport sign, adrenaline to give one last big push for home, confusion when you begin to slowly realize that the welcome to Westport sign is over 5k outside the town….but soon you are at the last junction, then it’s the last few 100m down the hill, ditch the bike and head for the finish…and the copious amount of John West waiting for you there!!

Today Gaelforce continues on through the hard work of the Young family (Jamie, Mary, Shane and Ciara), Bridget, Mona, Ines and all of the Killary Gaelforce team, this will be the 14th year and we cannot wait!

A truly iconic event and back on the Continental National Adventure Race Series.