The call was made late on the eve of the race on the back of a long couple of weeks hard training and racing. The body was tired and sore but the word on the racing circuit was the Race2Glory was a unique event and the lure was too much to resist. Plenty of time for rest after it. I got the race kit together and hit the hay. 5:30am and the alarm wakes me from my slumber. Without a hesitation, up, shower, breaky, bike in car and hit the road by 6:10. I will admit, I was feeling worse for wear as I hit the road but no use dwelling on it, it was what it was and I was committed. Music all the way to 11 and before I knew it, I was turning into Kiltimagh Co. Mayo.

The first thing that struck me was the bunting in the town. From one end of main street to the other was decked out in Blue and White. I pulled into the GAA pitch, met up with some familiar friendly faces and was coerced into doing the longer course. On my way down in the car, I was deliberating over the 20km or 40km, but if I heard once from them, I hear it a 100 times…”Go Big or Go Home!”

Up to the Clubhouse, where I met the lovely Avril Forde McGreal, a lady who I had been in contact during the week on numerous occasions and it was nice to finally put a face to the voice. Signed up to the 40km for my sins and off to get ready. The weather was perfect, not a breath of wind, temperature just shy of 20 and slightly overcast. No factor needed but just right for racing. 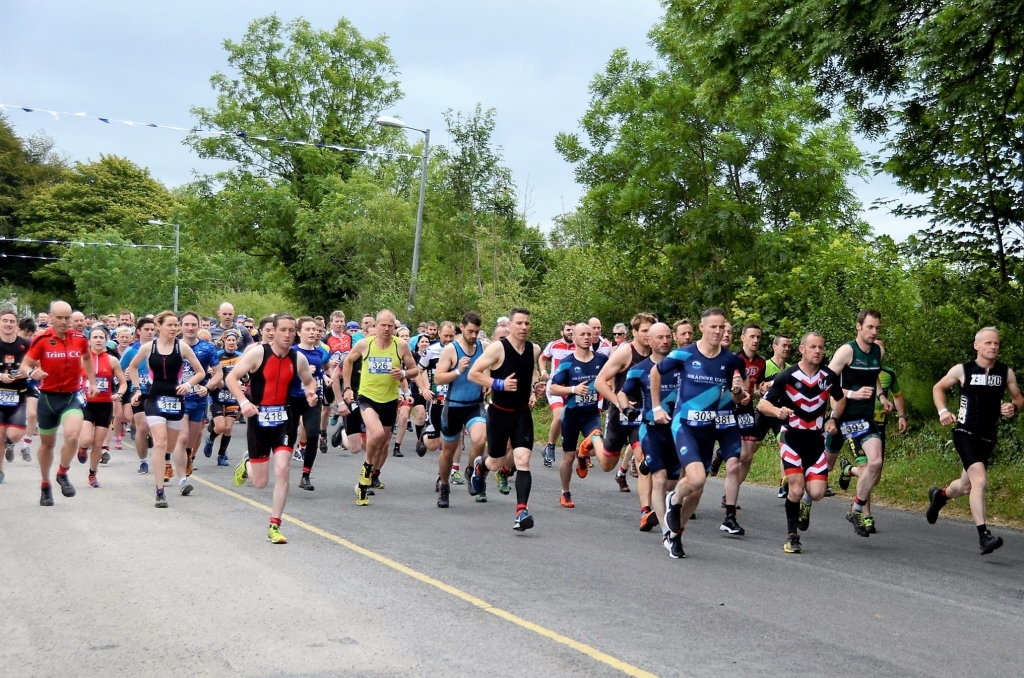 Up to the start-line, where Avril did the warm up and before we knew it, off we flew up the road. The main contenders were dots in the distance before no time. The first 2Km or so was flat but that soon ended as we headed towards the turbines at the mountain. The road quality changed from smooth tarmac to pot holed back roads. Not that this effected my ground breaking speed(he said wishingly). About a 300 meter climb to the top where we had to traverse across the top of the mountain, through bog and back down the other side. I had questioned where to wear an aggressive lugged pair of runners but glad I did here and especially coming back down the other side of the mountain. I had the confidence in footing to have a good old pace down here, making up a lot of places where I had lost on the flats. 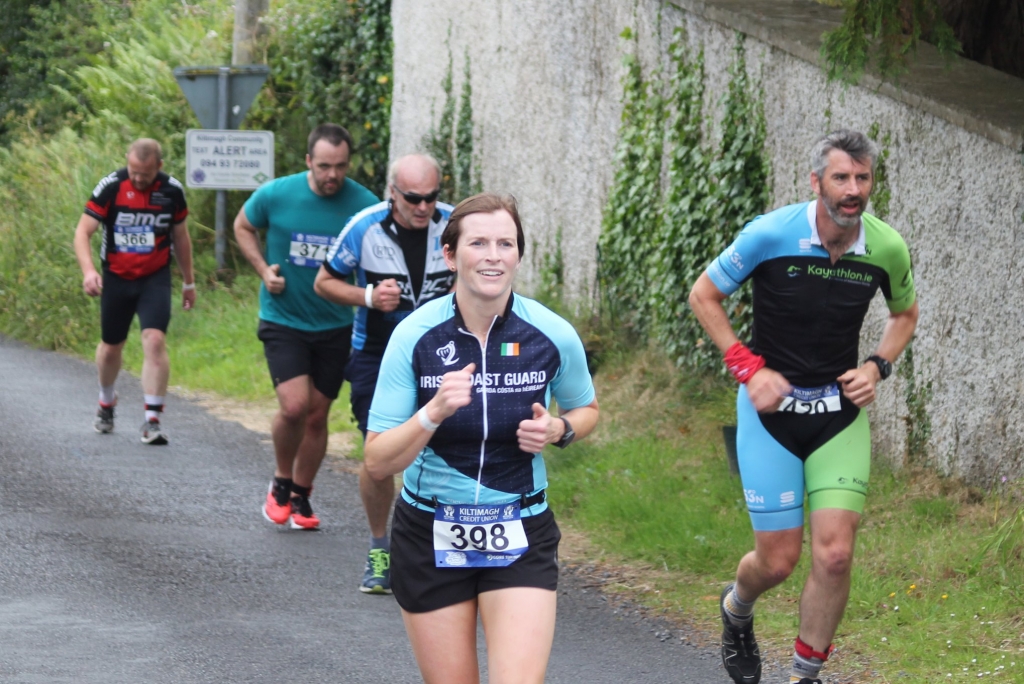 It must be said though, at almost every major turn and gateway, there were groups of people handing out water, oranges and bucket loads of encouragement. This I personally love seeing when the local community rallies in to make the most of the event.

Up over the hay bails and into transition under the cargo netting. It was a 10km run and to be honest, I was glad to get to the bike as my legs were heavy after the previous weeks training and racing. Quick drink and put the head down. Time to make up some time. I have been doing a lot on the bike of late and for me, it has really been paying off. Pity my running couldn’t say the same but more about that later. lol. 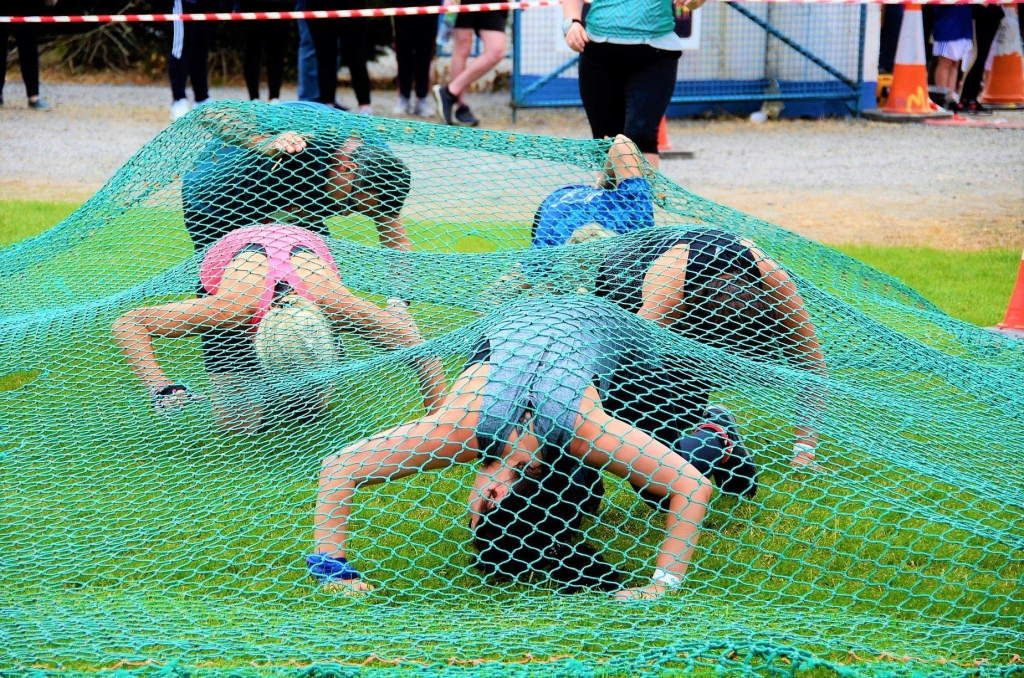 The first couple of kms are nice flat open roads and I was making a lovely indent on my positioning here and then we were directed right off the main road and up the back roads. This was crazy but lots and lots of fun. As we progressed up the road, the road quality dropped significantly unlike the altitude which went up and up. It was a tough slog but enjoyable but had to dismount to save what was in my legs for a brief spell on the most severe uphill section. Back on and a series of rolling hills proceeded which were kamikaze fun. If you have that bit of divil in you, you would enjoy this section, which I thoroughly did. No time to stop for all the offered water stations. Hammer down and back to the next transitions. 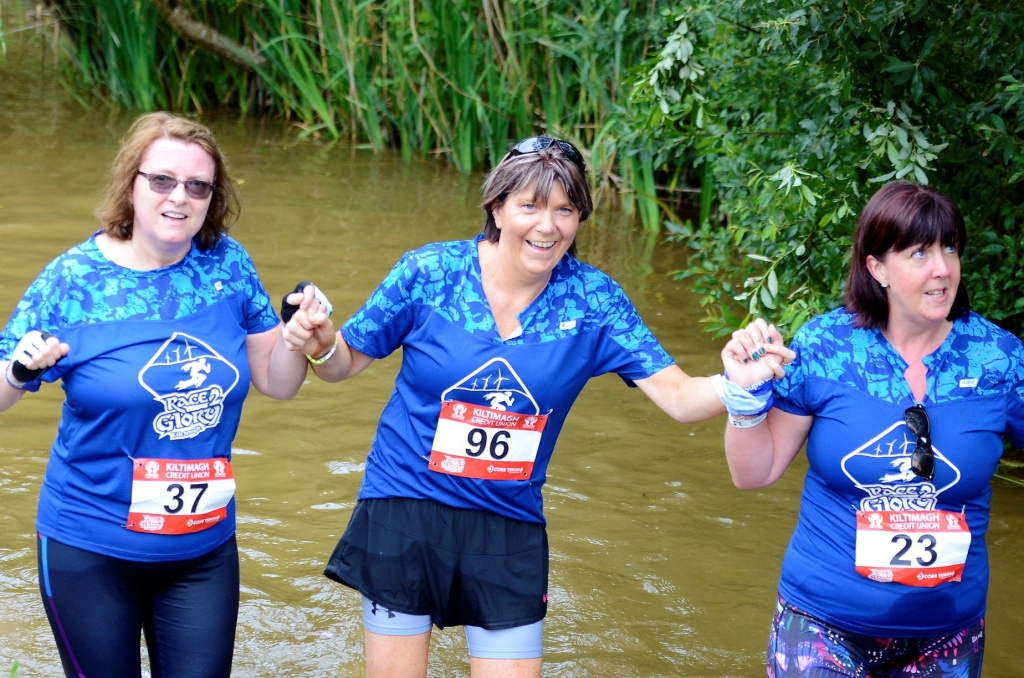 At this stage, my legs really felt like I was dragging tree trunks when I began to run, but was delighted to hit the “Run in the River Section”. This was beautiful. I honestly could have stayed in there all day. Guided out and encouraged once more by the stewards and locals, the last run section lay ahead. To say I would have probably been quicker running backwards is an understatement, but to be honest I didn’t mind, I knew this would most likely be the case when I reached this stage, clocking a 35min 5km, it was hardly going to get me the call for the Olympic team. I arrived back into the finish line at 2hrs 39mins where I was greeted by Avril. She asked me how I got on and what did I think of the race. I told her I enjoyed it but would review honestly during the week. A look of dread came upon her face. I told her she had nothing to worry about. This race was great. It was everything a race should be. It was tough. It was fast (even though I may not have been). It had every type of terrain. The cycle was class. The community atmosphere was great and it was great value for money. A race, A medal, a race t-shirt, a buff, a BBQ, ice baths, free physio and a massive goodie bag all for 45Euro. 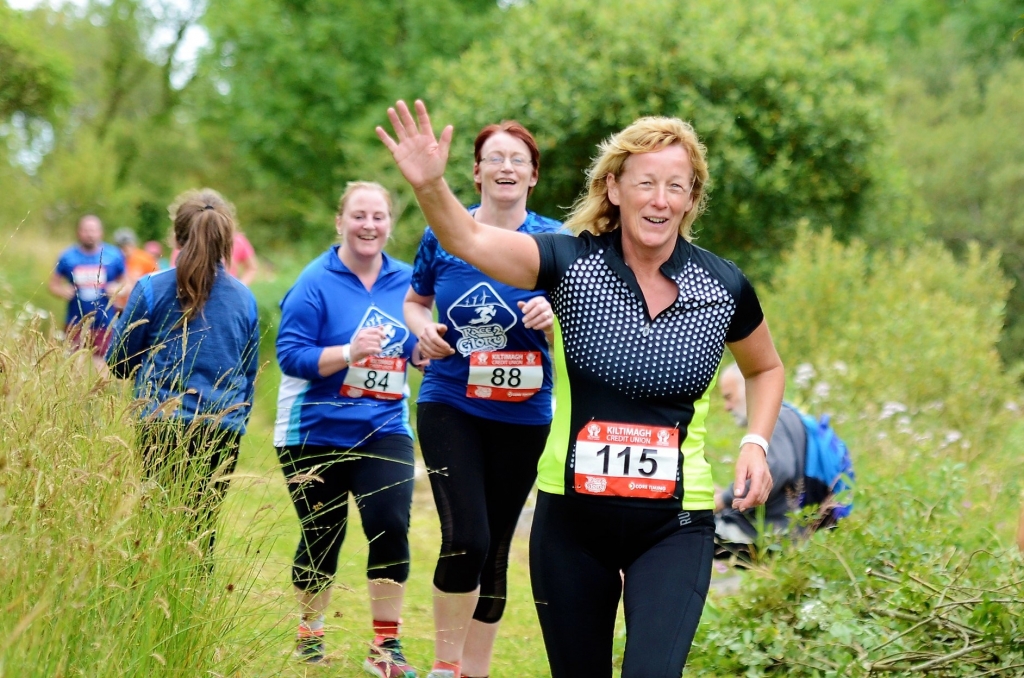 So that leaves the burning question I ask myself after every race…would I come back next year…Well the answer is a resounding yes. May take it easy and do a bit of a taper before hand as opposed to a big hard session 2 days previously next time.

The race itself would probably suit the stronger runner, well that’s what I thought till I checked the overall times and the winner of the men’s category, Jonathon Caufield, somehow managed to clock a 39min cycle section, a time I just cant wrap my head around. Unbelievable performance. In second was Des Kennedy and in third was Dwayne Flynn. In the ladies sport, Aileen McNamara took top honours, followed closely behind by Lisa Clerkin with a steller performance from Niamh Cleary in third. Keep an eye out for the updated Continental National Series Tables over the coming days. An update will be sent around on our Facebook page when they have been updated