It was that time of the year again, where I literally take the plunge into the world of triathlon. The King of Greystones Charity Triathlon (try-a-tri) to be exact. Roll back 15 months or so, I decided after a glass or 2 too many of vino to sign up for the race. What’s so crazy about that. I could not swim. Zero water training done, I unashamedly ran the water leg, in the process swallowing half the Irish Sea. An experience, i’d love to forget but was a stark reminder to the old adage, “fail to prepare, prepare to fail”. I left that day with a mixed bag of emotions. One, I was delighted that I had just completed my first triathlon and lived to tell the tale and two, what the hell was I thinking going there unable to swim.

Forward a couple of months, and an ankle injury I received at the end of October side-lined me for bones of 6 months from racing. Prior to the injury, I was absolutely flying (or flying in my relative terms of fitness). I didn’t want to loose it all, so it was suggested to me, why don’t I hit the pool and keep up some level of fitness and in the meantime, learn how to swim. So the suggestee put me through my paces in the pool and I was actually beginning to make some headway. Then due to work changes and pressures, my swimming came to a halt. I never got to train in the open water.

Now it’s race day, the sun was shinning over the South Beach in Greystones, afar cry from last years monsoons and gales. There was a real festival atmosphere and as I stood back, watching the warm-ups being blasted out of the PA system, I was glad I committed to the race again. It was time to make amends from last years catastrophe. I had a bit of an upset tummy prior to the race which could have been nerves. I tend to get this before races when I overthink them, and this one had been on my radar for some time. 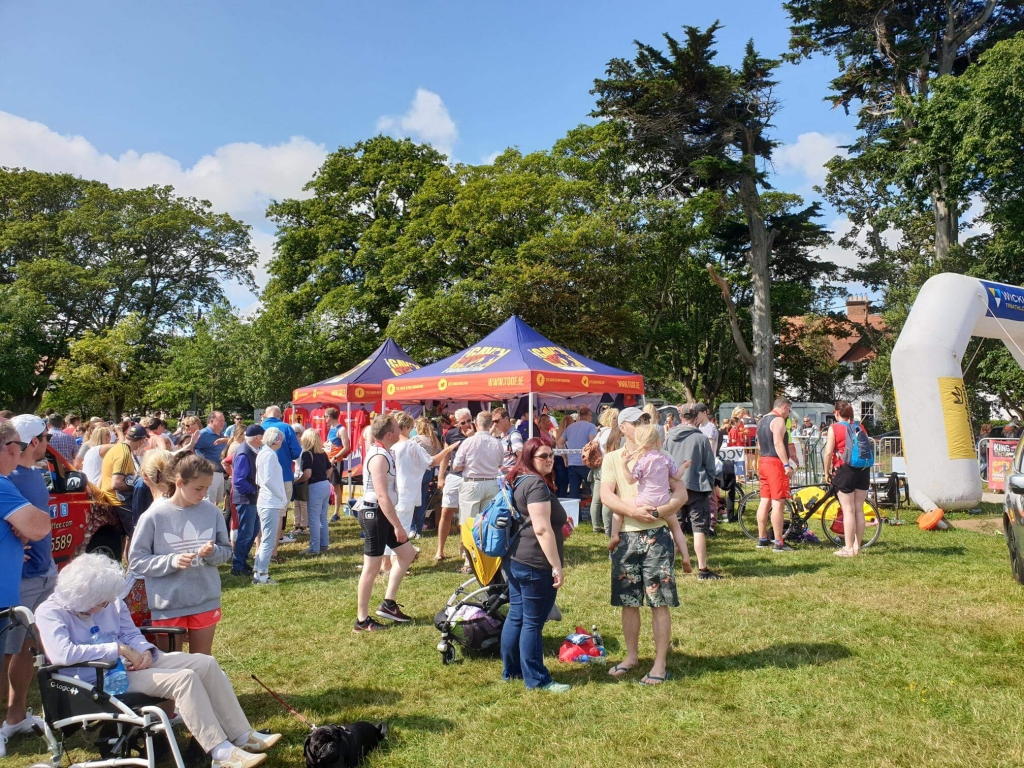 I taped my dodgy ankle up, went for a warm up run, and made my way to the Beach, bumping into my uncle Frank en-route. Customary slagging and off down to the Green hatted brigade. I left the wet-suit at home. A curious choice and I did get a few stares from fellow competitors but I wanted to see how my swimming improved unaided from last year as I didn’t wear a wet-suit then either.

Quick brief and we were off. The usual fun and commotion at the start. The initial cold shock for the first 20 or 30 seconds but that was soon a distant memory as I heated up quickly. It was about 200 meters swim and for the most part went OK. My annual mouthful or 2 of salted water and I stopped to recompose myself in kind. As I reached about 40 yards from the end, both the sprint and try-a-tri were exiting the water at the same location, so it was hard to see how far back i was. I reckoned possibly about 10th which was what i expected. 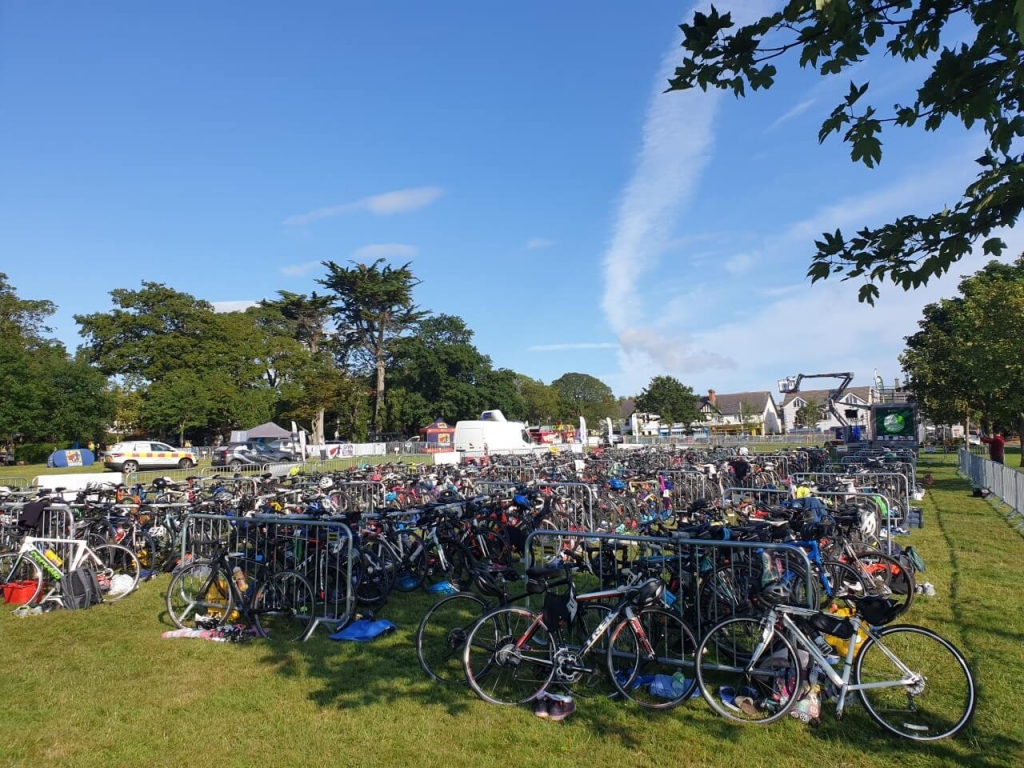 Quick change, socks, dry top, helmet, grabbed my bike shoes and heading to the exit. It could be argued what time I lost in the water not wearing a wet-suit I could have gained in not having to wrestle it off me in transition. Shoes on, head down. Time to make up a few places. It was impossible to know who was in your race, as I mentioned above, but as long as I just kept picking out the guy in front, I knew I stood a chance of holding my own. A couple of competitors passed me but it was plain to tell, these were the real deal, serious podium placers. All in all I was happy with this. I didn’t go all out on the bike, even though it would be my strongest of the 3 disciplines, as last year i did and dead on my feet come the last leg. I came back into town, dropped the bike, on with the runners, quick drink from the bottle and off I went.

As to be expected the legs felt heavy but I pushed on trying to keep a good average pace. I spotted a chap about 50 yards ahead with an Ironman tattoo on his calf. I thought, he must know what he is on about here, so I tried to stay in touch with him. By the time I reached the turn at the far pier, I was feeling surprisingly good and had caught up with the unknown pace maker. We stayed side by side for the next 2km, joked about the lovely pint at the end we would have. Probably unbeknownst to thee both of us, we kept pushing hard and the run flew by. As we approach the entrance to the South Beach, I felt I had more in the tanks, so I pushed on down the beach, under the bridge and with one final push, over the line.

I met my uncle again. We sat and chat for a few mins. I took on some water and food. I got a quick picture with John Glynn (Event organizer) and Tessa Kortekaas (Race ambassador & 2018 Ironman champion). Thanked them for all their hard work and hosting such a fabulous community filled event), And off to do a warm down run towards to K Circle garage and back around by the harbor, up by Trafalgar bridge and back again to the festivities which were in full flight. 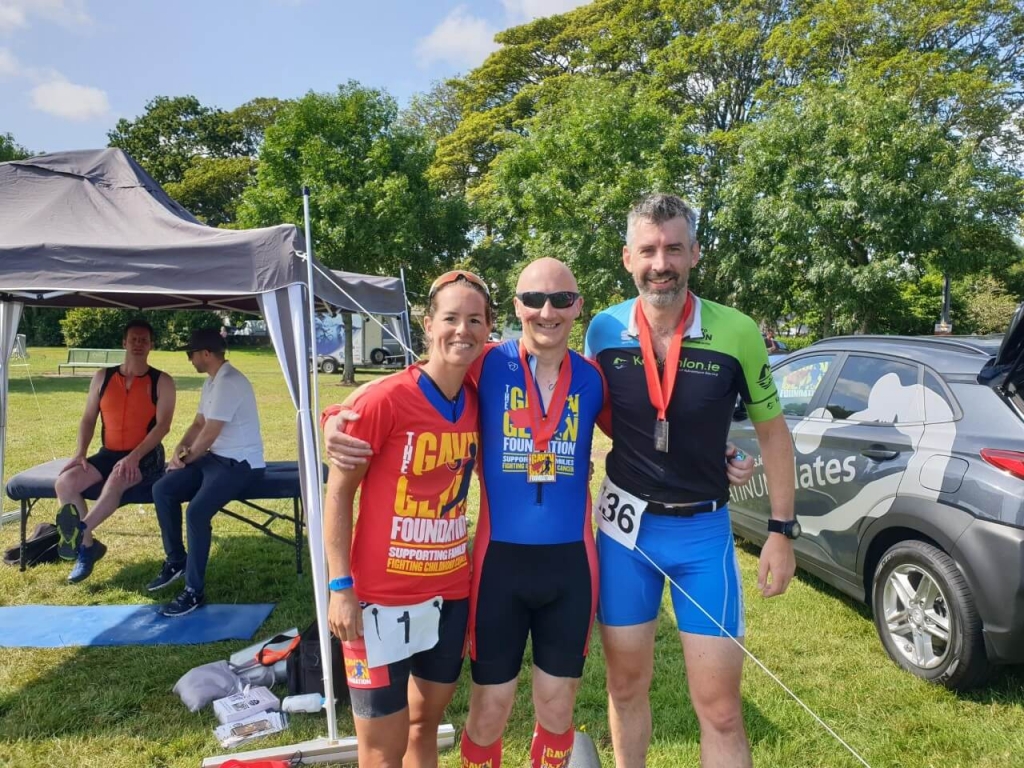 By the time I returned, the prizes were being handed out. I was about to just grab my bike and gear and head off but decided to hold on to see what times the winners completed the race in. 3rd Position was Matthew Norman. 2nd position Greg Dillon….whaaaaat!!!! It was surreal. I made my way up to the band stand truck, waiting on the punchline but all I was met with was a smile from ear to ear from the aforementioned John Glynn. I joked with him, “Jaysis, I have never podiumed before for anything in my life” which was never more apparent, when after the obligatory photos, I dropped the trophy box on the way down off the stage chipping it. Donkey. Regardless of it, I think it adds to it. It speaks volumes of the way I felt. Shock. Delight and everything in between. I wouldn’t change it for the world.

The competitive side in me was eager to find out how far behind first place I was. Turned out I should have been more concerned about what was coming up behind me. 9 seconds separated me and third place. Ignorance is bliss…just. 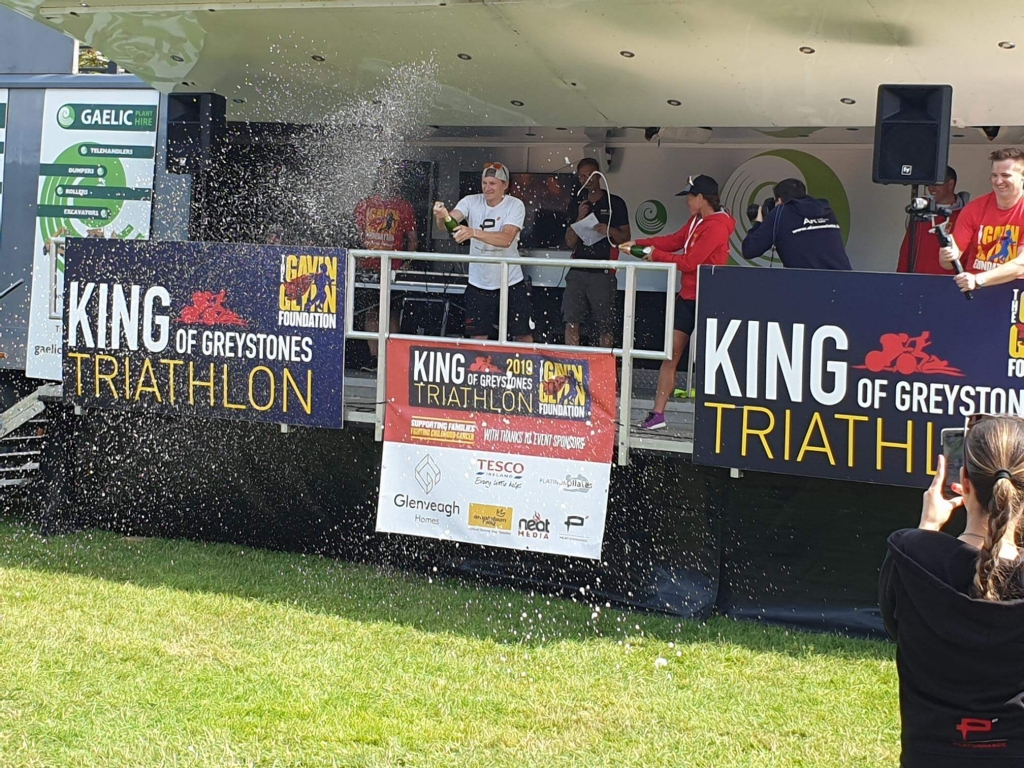 Racing aside, The Gavin Glynn Foundation had raised 32000 Euro profit after all expenses which were covered by Amphibian King and many other donators on the day. Well done John Glynn, Damien McKeever and to all King of Greystones crew. This was the 10th running of the race and the amount of time and effort that goes into putting on a production like this, I can’t even fathom.

I was delighted with the race. My swimming had improved no-end. Thank you Ciara. Cycle, run and transition times too. The mantelpiece filler was a very cool and unexpected bonus. The plaudits that came with it too. Now, what next? Sign up again, that’s what. Get open water ready. Bring the wet-suit and step up to the sprint distance. If you are new or want to try out triathlon, I would really recommend this one. If you are/were like me and not a great swimmer, you swim/shuffle along the shoreline and never go out of your depth, so you can stop and recompose yourself. I’m not sure when the next registration opens, but keep an eye out for it. 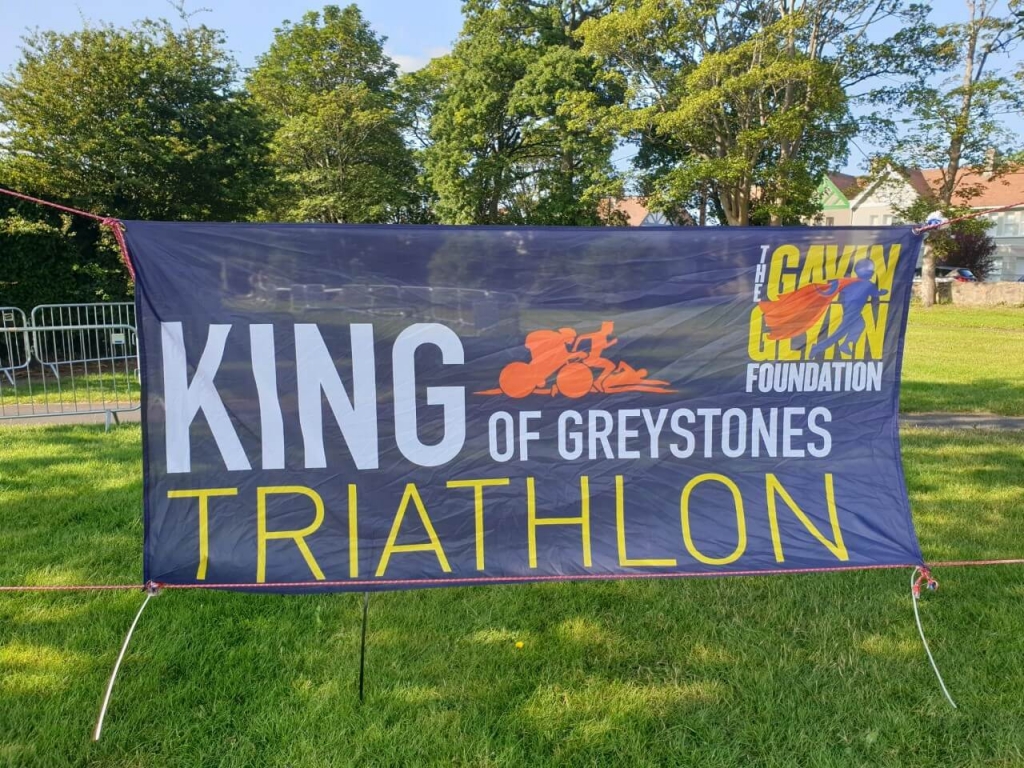