Back in the day, my younger days, my football days, I used to relish the hard slog in training. Muck up to my ears, in the cold dark winter nights, the boring repetitive laps and routines to build up the baseline strength and fitness. I used to love the regimental aspect of it. I believed it was a huge factor in why I was able to get super fit. My goal was to be the fittest man on the field so where I may have lacked in skill, I would be able to make up in workload and graft. I would train at nauseum with the team and on my own. I’d become obsessed with it but one thing I held and maintained was there was no fitness like match fitness to make you sharp. Running laps and pumping weights only got you so far. Never has this been more apparent than Sunday gone as I took on my first sprint distance triathlon at the King of Greystones Charity Triathlon.

My journey to this race started about 3 years ago. One night, after a glass or two of vino, I got brave and signed myself up for the try-a-tri version of the race. This is a shortened version, a 200m shoreline, chest deep swim aimed at beginners as opposed to the 700m sea swim aimed at the more experienced along with then 16.5km cycle and 5km run. I did it with little to no swim training, swallowed half the ocean but someone managed to land in about 20th out of 80 or so. I made up on the bike and run for my short comings in the water.
One year later, I’m back at the start line, in the try a tri again, a little better prepared swim-wise, after a long time off my feet due to an ankle injury, I spent in the pool rehabbing and as a result becoming a stronger swimmer. Lessons learned from the previous year paid off as I came in 2nd overall out of 79. (full race report)
Forward 2 years, after a Covid enforced break, here I aim, now with my big boy pants on, lined up for the sprint distance, 700m sea swim version of the race…bricking it. I had done a fair bit of sea swimming but rarely out in the deep water. Always close to a depth where I could stand up if I ran into trouble. I was sea swimming about twice a week and was confident I could swim the distance. I had the arm strength to keep me going without the need of the feet to touch the floor to recompose myself. My breathing technique was way off where it needed to be. On my own, I could swim properly for about 50m at a time, before needing to thread the water to collect myself and off I’d go again and again. That was my plan for this race. Its all I could do…at this stage. I knew from previous years about “the washing machine”. A term used for when the race starts and the water is getting churned up by frantic kicking and arms splashing. I knew that I should try and keep as clear of that as possible.
I was in wave 2. A wave aimed for those who expected to finish the swim between 12 and 18 mins. All training swims indicated I would finish at the latter end of this group but I was happy enough with that, knowing there was a 3rd wave coming after me 10 minutes later. The first wave were already out in the water and it was frantic. These were the fast guys, and they were motoring.

5,4,3,2,1 and we were off. I took the early decision to hang back as much as possible and avoid the washing machine as much as I could. Even at that though, I still received my fair share of arms and legs and churned up water. Within 20 seconds, I was in new territory and the enormity of the challenge sank in, the sea floor was falling away from me, and a little bit of panic set in. I was about 10m of proper swim strokes and having to stop and start and stop and start. 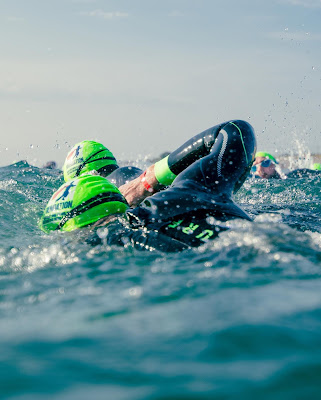 It was about 250m out to sea before the first buoy and at 100m in I felt my left calf tingle. It wasn’t long before the full cramp set in and Ill admit I got overwhelmed. This was going from bad to worse. I was reduced to something that mimicked the doggy paddle. By the first turn I was practically last and could now see wave 3 closing in on me, quick. I could see one of the guys on the kayak signaling to another to see if I was OK. I knew this, as a race, was over for me, and more about just completing the swim in whatever fashion I could. A mixture doggy paddle, breast and back stroke got me back to shoreline. The longest 28 mins of my life.
Delighted to have made it back without tapping out but left me frustrated. But what could be done there and then, nothing but just get on with. I remembered what John Glynn (Race Director) had said before the race, that money raised by this event and events passed  was currently assisting 2 families as their kids were heading off to shores foreign for cancer treatment. It put a real perspective on my first world problems.
I hobbled back to transition, stopping a few times to stretch the calf out. I knew I would be grand on the bike and run. It was a new bike route (20km) and I have to say I loved it. So much so, I lost count and did 5 laps instead of the required 4. Even one of the officials jokingly let a roar at me saying “how are you still out on the bike”. I didn’t mind to be honest as like I mentioned above, my race was effectively over midway through the swim and it was now about just trying to make the most of the rest of the day. So back into transition and out to the newly adjusted run route(4.5km) which I enjoyed too.

I’ve learned a lot of lessons from this. More time in the water is needed but nothing can simulate a race, like a race. I will need to get more under my belt. Get used to the washing machine. Be part of it and and make the biggest splashes. I’ll be back next year and will be ready.

It would be remiss of me to hog all the limelight and not mention “the Man from Atlantis” himself…Padraig O’Connor. On Sunday, he stood exactly where I did 3 years and took on his first triathlon (try-a-tri) and came home 3rd out of 64. Fantastic performance as he will openly admit, “Era, sure I cant swim to save my life”. Could this be the start of something beautiful, only time will tell… 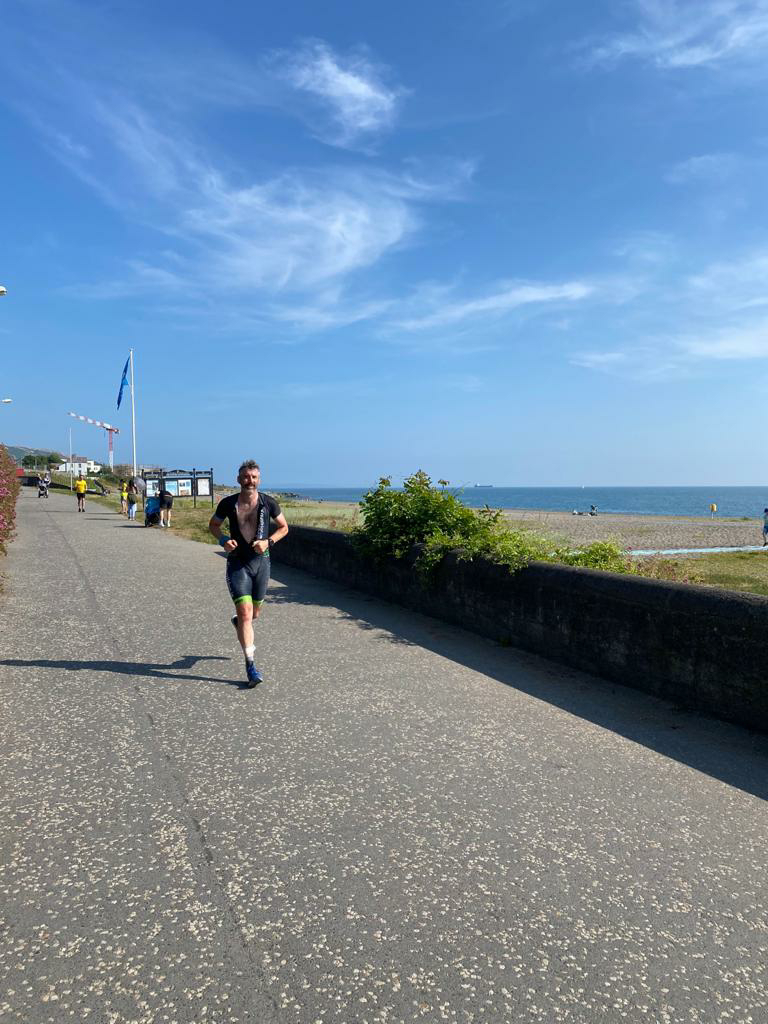 The event itself, is brilliant. It has that relaxed, festival vibe where competitiveness and competition play second fiddle to what it’s all about. The work that goes on in the background is staggering and it blows me away each year.
It’s been going for about 11 or 12 years now I think and seems to get bigger and better each year. If it wasn’t for Covid restrictions, they could sell it out twice over. Before the race, on entries alone, over 28,000 euro was raised for the Gavin Glynn Foundation and it’s such an amazing cause. I tell you for one, I will be back next year and the year after, and the year after that.
Well done folks… 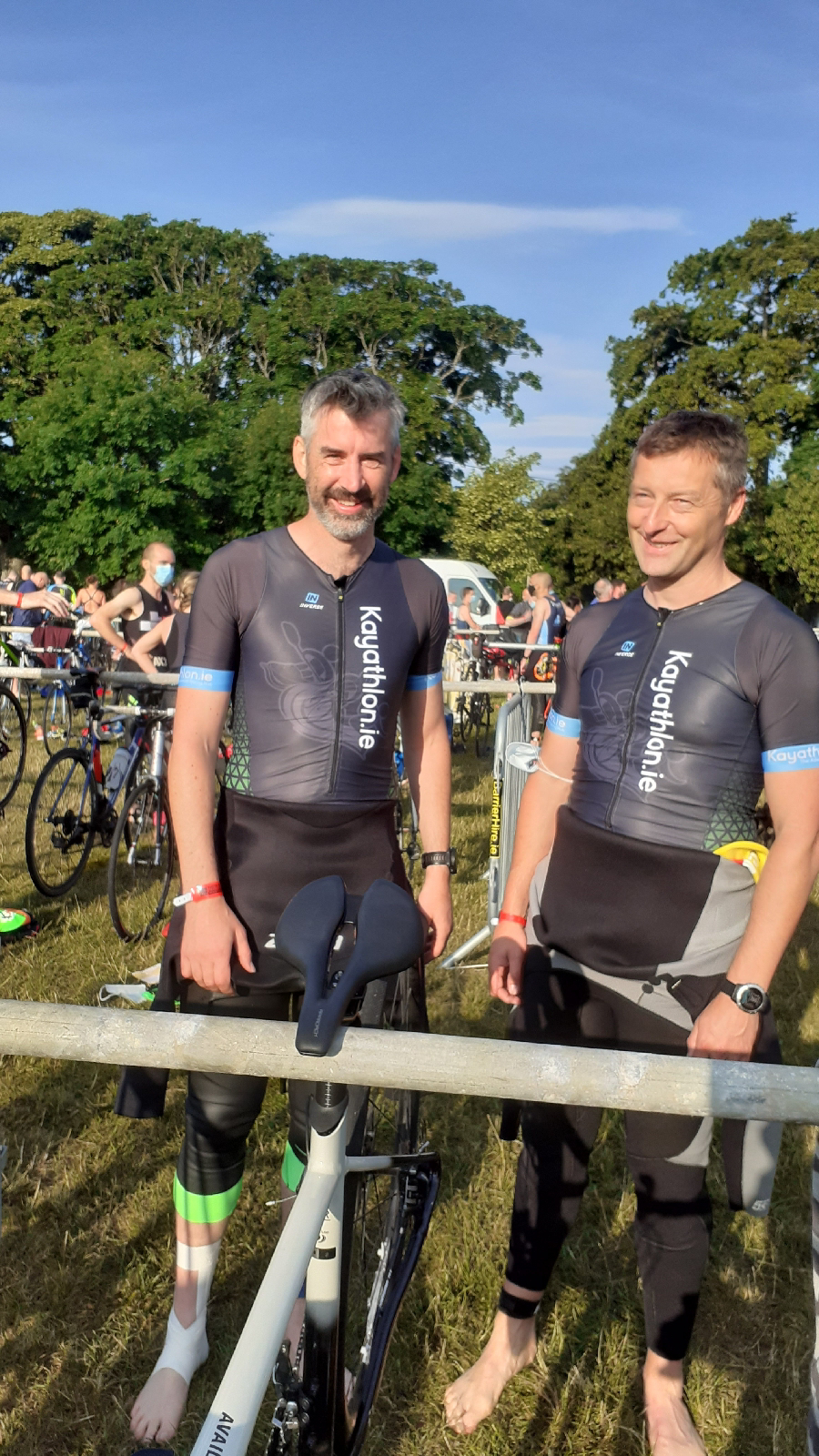