At Kayathlon, we are lucky enough to get invited to some of the most beautiful, scenic parts of the country, to take part and savor these great events that take place. In a full, no Covid year, you can imagine there is barely a spare weekend over the season. Pre 2020, there was up to 30 plus races in any given calendar. And that’s just adventure races, so we, the team were always on the go. That’s not a complaint!

The KnockMEdown Adventure Race (KMD) was one that has always eluded us, till this year. From friends who had done it, we had heard over the years that we HAD to get down to try this one out and so we finally did!

From the off, the communications leading up to the race, emails/social media posts were on point. They were often and they were clear. Because of the current climate, there has been a few instances where events have nearly been afraid to communicate, which is understandable given the ever changing landscape, but KMD didn’t hold back.

I was initially down to attack Quest 12 Beara, on the same day, but due to an ongoing injury, I wasn’t able to reach the levels needed for such a challenge but had enough in the tank to have a decent clip at the shorter distance (Challenge) of KMD. And being a first timer here, there is always that added bit of excitement, the unknown. 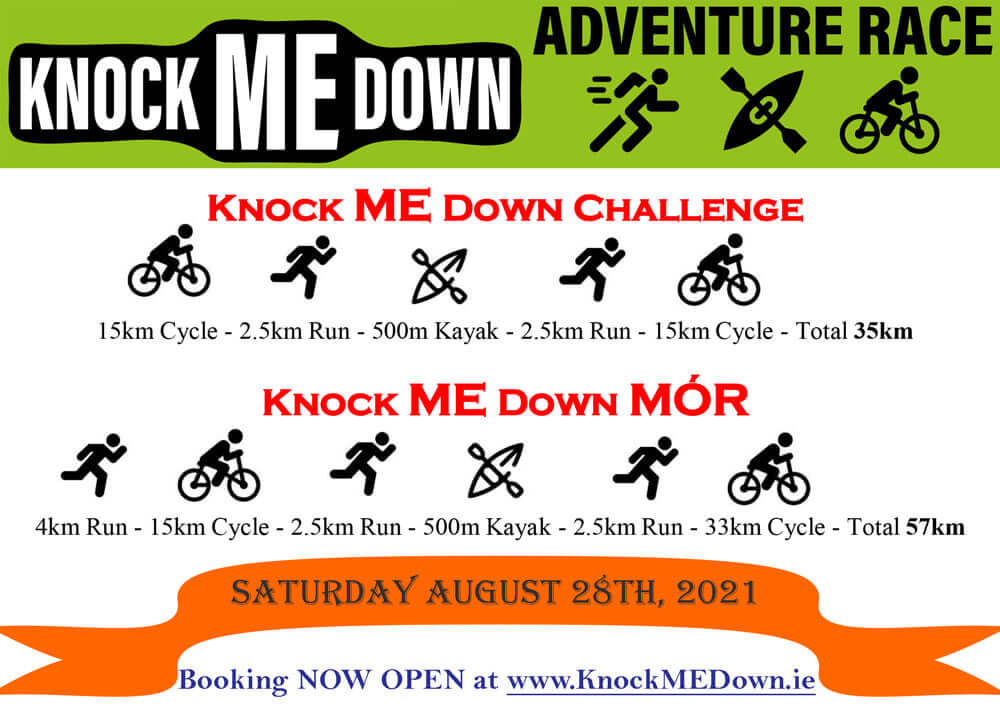 In keeping with Covid guidelines, waves were rolling out in staggered groups of 20. Every 10 mins or so. I was in one of the latter waves and as it happens was first out of the group. There were 291 participants in the Challenge alone and 220 in the longer 57km Knock Me Down MOR distance. An interesting stat, was that there were only 20 no shows in total which speaks volumes about this event and how we all want to be back doing what we love.

From the off, I had a simple plan! Go as hard as I could for as long as I could. With this being a new race to me, I did a bit of research checking out what I could. I could see from google maps that the road was in good condition with a few little rolling hills but nothing too nasty, so this allowed me to put the head down and push hard. There was hardly a junction that wasn’t manned by at least 2-3 stewards and sign posted well. And there were a lot of junctions. You could tell there was real buy in from the community of Newcastle and surrounding villages in Tipperary. I always love to see that. These community based events are always great for that kind of thing. We heard, that there was an issue earlier on in the morning with one of the junctions in the longer, but you could see they had definitely cleared that up by the time we got there. So I was making good time and halfway through the cycle I began to pick of cyclist from the wave in front. But you could tell they had a different plan that I did and were very much out to have the craic and make the most of the day. Only when I took the left turn to the slow 3km climb up to the transition that I saw I was being closed in behind from a fella, a local donning a Clonmel Tri Club jersey be my marker for the day. I thought who knows the area better, him of me. Definitely him.

We came in together and I stole about 15 seconds I say in transition as I headed off into the woodland trail. 1 minute later he had caught me and passed me. The heat of the day was stifling amongst the tree line. No wind, just dead air. The total “run” was only 2.5km but it felt a lot longer. You know that kind of trail that is just angled that it is runnable but you would gas out fairly quick, then this was it. I ran as far as I could, still trying to keep the Clonmellion in my eyeline but I was reduced to a power hike and I saw himself do likewise ahead of me. Then it was through the forest, out onto the road, down the hill towards the bridge, where a water station but I chose to push and then up the very steep climb to the lake. It became very apparent, very quick, my lack of trail running and vert training. My heart was out my throat, as my nemesis (only joking) vanished up the mountainside. Again this was only a short distance, 1.5km to the summit but tough when you were going hard. My mind was blown when I ascended onto the flat at the top of the climb. The views! Wow! Spectacular doesn’t cover it. I reached for my phone but remembered I had left it in my car. The lake was gorgeous and the panorama amazing. You could see over to the left where the cycle for the longer distance went and it was lovely. I believe it’s known to the locals as “The Vee”.

I shuffled along to the transition and got my paddle and life jacket and in I got. No waiting around. Passing a good few along the loop of the lake I made up some good time putting in a 3rd fastest kayak of the day (in our race). It’s nearly a pity it was over so soon. I could have stayed on the lake all day. On the Thursday evening before the race, I was scrolling through Instagram when I came across a post with a picture of Bay Lough, from an old friend from school. He had posted a photo of a majestic looking lake. Real Instagram stuff. He had stated the “Rumor has it, it’s was bottomless!!!”. Also Legend has it, that St. Patrick banished all the snakes in Ireland to this lake. I was tempted to jump in and find out.

The next section was a 2.5km decent back to the bike and it was along a broken trail. Lots of moving rocks and tree roots to contend with. I had to take this very gingerly with my ankle and with these injuries in mind, I was passed by a few. I didn’t mind as I knew with a strong last cycle back I could finish strong.

As I came into transition, a fellow competitor caught me. We grabbed out bikes and hit the road. It was the same route as the first cycle but just in the opposite direction so I knew what to expect. I couldn’t shake this guy off my back wheel so it was going to be a tough cycle. By the 9km marker, Decan Bagnell had caught us. Declan started in the wave behind us, so he had made 10 minutes on us which is not surprising as he is a very accomplished Adventure racer. I was surprised I held out that long as I had spotted him on the lake as I was leaving. So with one last push we got back to the smiling faces at Newcastle as the 3 of us came into together. Overall, I finished 16/291 and was delighted with that, all things considered. Declan was 3rd. The Clonmellion from earlier came in 8th I think.

The “after’s” typified what I love about these kind of races. The community. The hospitality and good vibes that was on show throughout the day, there was a tent with more hot food, protein drinks, tea, coffee, yoghurts, fruit than you can shake a stick at it. It seemed that every corner shop in Tipperary had donated to it. Just lovely. A real feel good event and given the times we are living in with stories of doom and gloom, cancelation after cancelation, it was really uplifting to see.

My conclusion to this event is a big thumbs up. Definitely one for the diary next year. I’d like to personally thank Diarmaid, all the crew and the community for putting on such a great event.