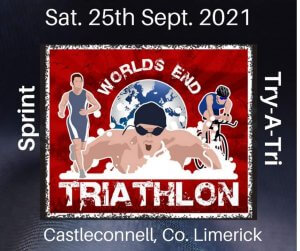 Last weekend, was a busy one. Padraig headed to Fearmanagh Adventure Race and I to The Worlds End Triathlon in Castleconnell Rowing Club, Limerick. Why Castleconnell you may ask? Well after months of coaxing from the brother, an exiled Dub rower, now living in Killaloe, I’d never hear the end of it if I didn’t come down to support the local club. It was a bit of scramble for entries, as I had left it last minute but thankfully a batch of entries came free the night before. So I jumped on it.

It was a 2pm throw in, so that in itself was a win already. No early early starts. There were over 260 registered for the event, split into 4 categories. Sprint, Para, Relay and Try-a-tri. I finally put my ego aside, got some sense and dropped to the Try-a-tri distance (200m). My last 3 Sprint outings were nothing short of disastrous in the water. I’m still in throws of learning to swim and doing the sprints left me 4,5 & 6 last out of the water. It was a distance too far, but I’m getting there.

The weather was perfect. It was a warm day with little to no wind. A recipe for some quick performances and if the bikes on show were anything to go by, these guys wouldn’t be hanging around. I grabbed the race pack and started to get myself ready at the busy boat club. Wrestled my wetsuit on and went over to Try-a-tri waiting area. We would be the forth and last wave out into the Shannon. The first 2 waves waded there way into the water and tore up the river on the hooter which was about 5 mins apart. Some really strong swimmers in there.

Next up was the Para race. This was amazing to watch. There were 8 in total, each tethered to partners/guides by a rope of sorts. Some choosing leg to leg connection. Others waist to waist. Even the thoughts of this bowled me over. Here they were, about to swim 750m, going of every word of their guides…and absolutely crushing it! It was a down the river against the flow for 375m or so and back. 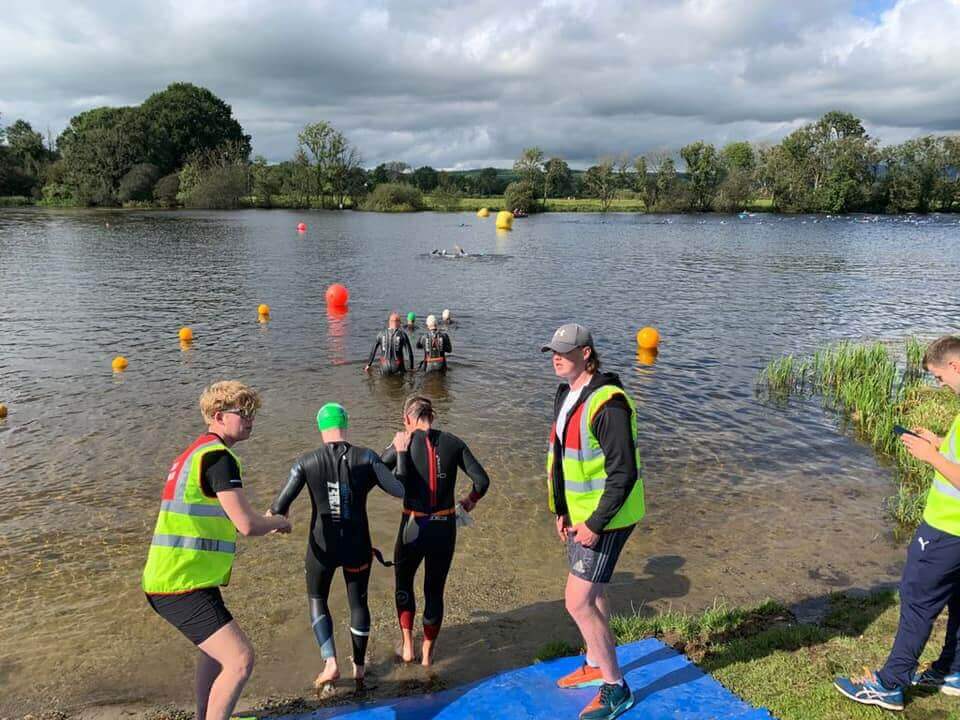 We walked down to our waters edge where I found an old sliotar, reminding me of a lyric from a Pogues song given the location. It was as if Shane MacGowan was here once upon a time observing the row boats landing himself. This distracted me momentarily but as we waited for our turn to enter the water, I could feel my heart rate pumping. I’m really not the biggest fan of water as you may have guessed but I just wanted to get it over with. Probably the wrong attitude but one that will dissipate as I get better in the water I’m sure. I’d been training away on my own and with Belpark Triathlon Club, having just done my first lesson the Tuesday before, which proved invaluable. I was the king of bad habits and after they pointed them out to me, I knew if I could at least half them today in the water, I’d be doing fine. There were 52 other competitors. I made to the front and climatized myself in the water. Letting the initial shock of the temp drop work its way through me. 5,4,3,2,1 hooter!!! I knew the key to me not making a tit of myself was to stay came and focused. Work on my breathing and the rest would look after itself. And I have to say, it did. I felt really comfortable and had began to pull away with only a handful up front. But like the old saying goes, “Everyone boxer has a plan till he gets punched in the face”. In this case, an knee or foot in the neck. I swallowed a lung full of the Broad Majestic Shannon and the last 50m or so was back to head above the water and by time I reached the exit point I had lost about 30 seconds on the leaders. But I was actually really happy with that swim! Huge improvement from last few outings.

Into T1, my bike was a stones throw for the shoreline so it was a quick transition, drink, wetsuit off, bike shoes/helmet on and off to the mount line. This was a 22km out and almost back, to T1. T2 was about 1km up the road. This is my strongest discipline of the 3. Head down and time to make up some places. Through the town which was packed with local well wishers and cheering. Got onto the main road and off towards Matt the Thrashers. I was picking of cyclist after cyclist. Making some good time up. But decided not to go all out but to save some legs for the run as I’ve been guilty of in the past. The brother was out stewarding at one of the junctions, complete with flag and high vis directing the traffic. Although the thought of soaking him with my water bottle did cross my mind, I thought I better keep what was left as it was a warm day. 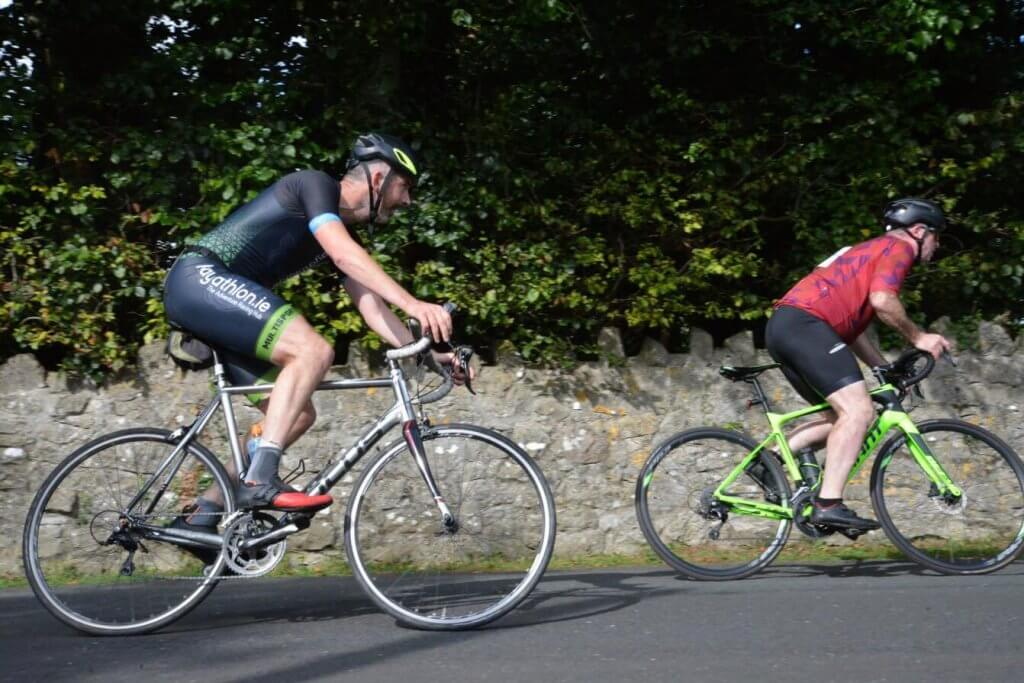 About a kilometer after the turn, something happened that made me sit up and nearly applaud except they were going too fast. A tandem bike complete with para athlete and guide roared up the hill passed me. Brilliant and inspiring stuff. They were quickly followed by tandem no.2. I had a great bit of leap frogging with a younger leggier competitor on the way back. He was also in the Try-a-tri. He eventually got the better of me on one of the hills so I let him off, knowing the next time I would see him would be at the finish line. 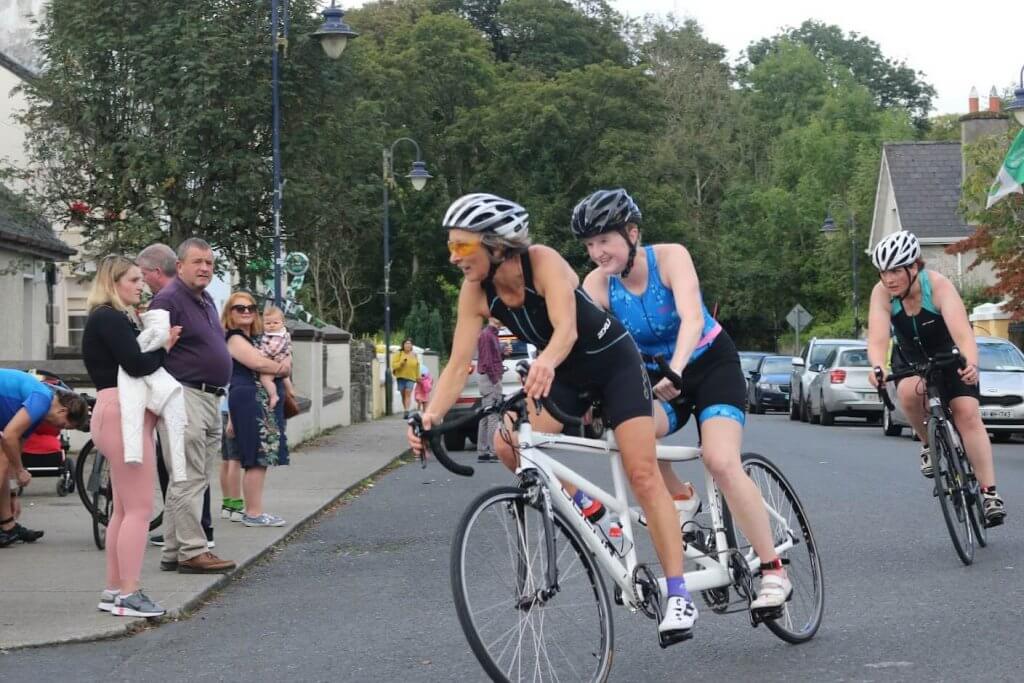 I got back into the town and over to T2 where I had dropped my runners at earlier in the day. Quick change and off i went but took it easy for the first about 200m as it was a hilly section. I was warned about this hill that a lot gas out on it. No use burning what I had left in the tank on that hill. Soon settled into a nice rhythm and began to clock up the kms. I was joined by Roscommon ladies footballer and adventure racer Caroline Conway about the 3km marker and with short syllabled sentences we spurred each other on. I knew if I could keep up with her I would be in good stead. From what I could make out, I was roughly about 5-8 place as I had only been passed by 2 I could see. We came back into the street filled town and to cheers, we sprinted to the finish line. Caroline pipped me in the end, and picking up top honors in the ladies try-a-tri. I came a very happy 5th overall. But first in the 90-92kg, 45-46 year old category :). I’m looking forward to the pint I won off Padraig as I was aiming for sub 1hr 20m and finished in 1hr 14min. Mine’s a Guinness. 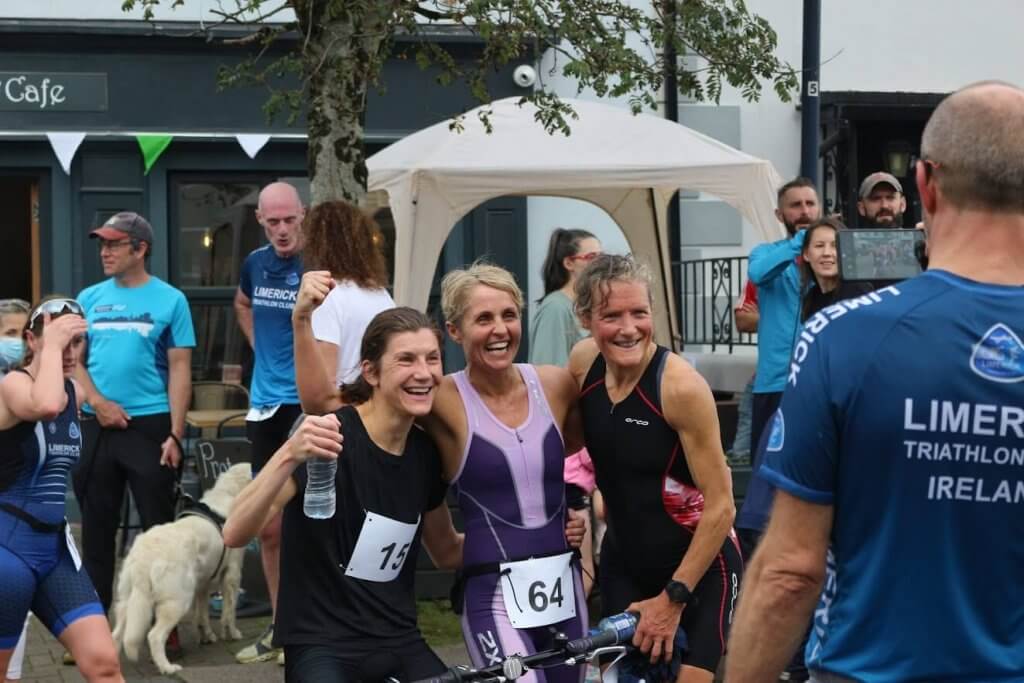 This was one of those great community events. Every corner, road crossing was packed with stewards, well wishers and supporters. I frigging love these kind of events. Especially after we have all been through over the last 18 months or so. To see people back out, the smiling faces, the community spirit, enjoying life. We may not be back 100% yet, but last weekend was good enough for me. Would I recommend this event. Absolutely. Especially for those who would like to try out triathlon.