Immerse yourself in the Wild Atlantic Way as you take on the challenge of West Cork’s islands, bays, and peninsulas. On August 31st 2019, take part in the second Bantry Bay Adventure Race and tackle West Cork’s terrain!

This is a chip-timed event, co-ordinated and timed by our expert team, supported by Cork Sports Partnership. It’s a test of teamwork too, with competitors pairing up after the run to bring double kayaks across Bantry Bay and back to the Abbey Pier.

From here, you’ll be cycling out from Bantry onto the renowned Sheep’s Head peninsula, skirting the bay and with views back across Whiddy Island and Bantry town. Not that you’ll have time to look as you race down the country roads to Gearhies, doubling back towards Bantry for the final stretch of an invigorating contest.

Take on the challenge alone, or join with friends to compete in the team event. Your team runner will join up with your team’s kayaker in the changeover zone on Whiddy Island. Battle your way across the Bantry Blueway to hand over responsibility to the team’s cyclist on the Bantry side. It’ll be up to the cyclist to complete the Sheep’s Head leg (if you see what we mean)!

And with just 240 places available (30 of which are allocated to the team event), there’ll be a race just to make it to the start line. Pre-register for our 2019 race!

One of seven inhabited islands off the West Cork coastline, Whiddy lies in Bantry Bay between the Beara and Sheep’s Head peninsulas.

You’ll cross over on the Whiddy Island ferry to the starting line, and the run will take place in two waves, covering a mixed terrain 5k route with a 600m cross-country element.

After your run, you’ll kayak back across Bantry Bay in double kayaks. (You will only be timed for the periods in which you are participating in the race. Your time will be paused while you are in transition between race sections). 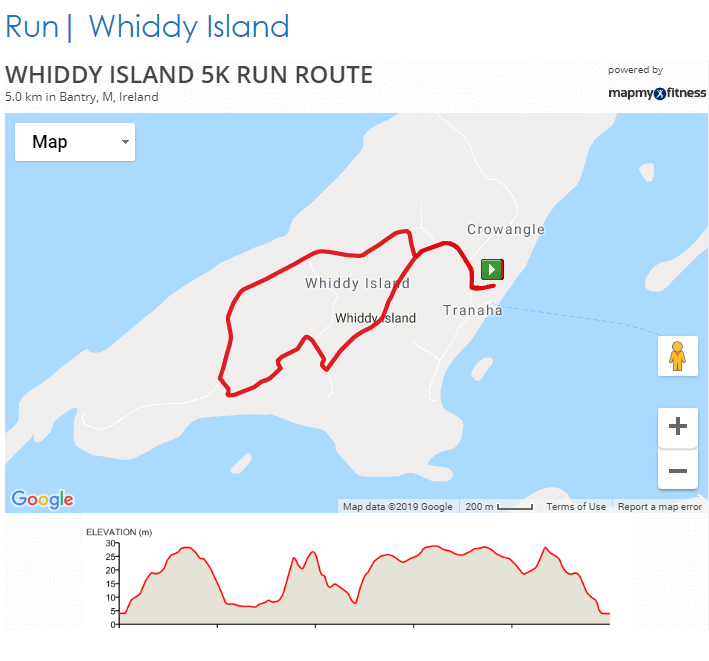 You’ll be covering a 1,500m stretch of the Bantry Bay Blueway, a fantastic new zone designed to get everybody out onto the waters of one of the world’s most famous and scenic bays. Try not to get distracted by the view! 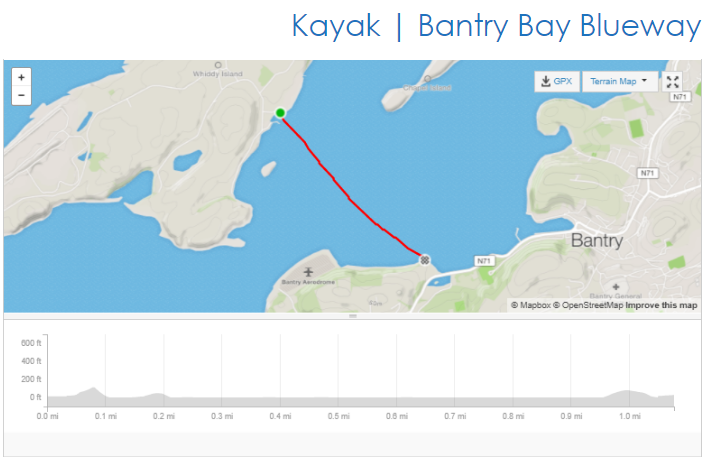 The Sheep’s Head peninsula might be most famous as a destination for walkers keen to hike the Sheep’s Head Way. But it’s home to a fantastic cycle route too. On the third leg of the Bantry Bay Adventure Race, you’ll strike out from Bantry and down the peninsula towards Gearhies.

On the return journey, you’ll get to look back over the terrain you’ve conquered as the views open alongside you over Bantry Bay and Whiddy Island. 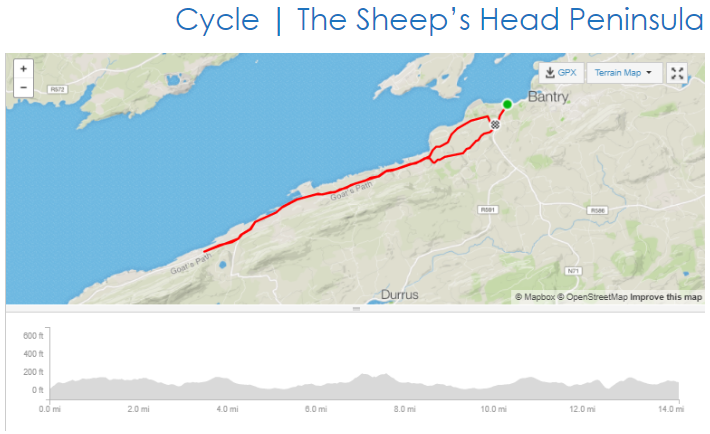 If the weather is against us …

If wind conditions prevent the passage from Whiddy Island to Bantry, then the kayak route will see your travel along the Whiddy Island Blueway in sheltered bay areas. Athletes will then await the return of all wave competitors to a neutralized area. They will then be ferried over to the bike transition area to conclude the race.

If in the unlikely event that neither Plan A or B are possible, then athletes will complete the run on Whiddy Island and all athletes will be ferried to Bantry Abbey Pier for a 1,500m kayak in the direction of the local airstrip and back to the bike transition area to conclude the race.

So, barring an apocalypse, we’re good!
Don’t forget to pre-register!

Looking forward to taking part in the Bantry Bay Adventure Race? We’ve gathered together the information you’ll need before you register.

If you have any further questions after reading our FAQs, please don’t hesitate to contact us on email at info@bantrybayadventurerace.com or our Facebook page!

If you are a registered event participant, you will be able to pick up your event number, timing chip, and any other info you require at the Abbey Pier, Bantry, on the day of the race from 7:00 – 8:45am. You should place your race number on your outfit, front and rear, with the pins we provide.

Wave 1 entrants must register between 7am and 8am, and Wave 2 before 8.45am. Registration will take place in an office on Bantry’s Abbey Pier (Our registration will be clearly marked as you approach Bantry on the N71).

Choose the set-off time that suits you best. Participants will be setting off in two waves, and the team event will start with wave 1. Solo participants can choose a wave time. You will need to pick your wave at the point of registration (no option will remain if one wave is already full).

The first wave will take the 8:30am ferry across from Bantry to Whiddy Island. Running will start at 9am.

The ferry price is included in your entry fee. A return ferry is also included for the team runners and this will return to the mainland after all ten runners reach the finish line (all teams are registered in the first wave).

Choose your wave start time – 9am or 10am – during registration. Double sit-on-top kayaks will be available for participants. Individual competitors will be in double sit-on-top kayaks. Times will be paused at the end of the run, resuming when you join the kayak section of the race with the nearest available run finisher. While there is bound to be some unevenness in people’s skills, it is a test of teamwork and co-operation above all else!

Only 140 slots are available, so book early!

To enter as a relay team, you must register as a mixed-gender team of three in Wave 1 (Wave 2 will not be an option for teams). You decide who runs, kayaks, cycles. The person who runs on Whiddy and the kayaker will need to take the ferry trip over to the island. The kayaker will be assigned a single-person kayak. Your third team member, who will cycle for your relay team, will need to stay on the mainland. They will join the race at the transition point at Bantry’s Abbey Pier.

Participants completing the running and kayaking section of the event will get the ferry for the first wave from Whiddy.

Single sit-on-top kayaks will ONLY be available for the kayaking stage of the team event.

There are 20 team slots available for the Bantry Bay Adventure Race 2017.

Both team and solo event participants MUST sign in at the Abbey Pier the morning of the event to collect event number and timing chip. All members of the team should sign in so that they can complete the event waiver.

Do I Need to Train for the Event?

It is definitely advisable to train for the Bantry Bay Adventure Race. We’ll be sharing training tips on our Facebook page, and we’ll also be letting you know about a kayak taster event on Whiddy Island this June.

The clock will run continuously during transitions, apart from during the period from the end of the run to the start of the kayaking, and from the end of the kayaking to the start of the cycling leg (to ensure safe transfer of cyclists onto a brief stretch of the N71). Each competitor must complete the prescribed distance in each discipline one after the other in the designated order.

The ferry price is included in the entry, and you will need to board the ferry at the time specified for your wave (8:30am or 9:30am) at the Abbey Pier. Spectators are welcome to travel to the island on the regular Whiddy Island ferry which will run to its usual timetable on the day of the Adventure Race.

Do I Need to Bring a Bike and Helmet?

Yes, you’ll need to provide a bike and a helmet. We’ll hold your bike for you at the transition point near the Abbey pier in Bantry.

The bikes will be racked in a secure manned area adjacent to the kayak landing point in a neutralized zone at the start of the cycle leg which is the final discipline.

Cycle shoes can be left with the racked bikes, and other shoes can also be left in this area for collection after the cycle. You can also leave drinks and any change of clothes beside your bike as you may need them after the kayak event.

If you are the cyclist in a relay team, you can stay on the mainland until your team-mates complete legs one and two of the Adventure Race.

Bantry Bay Adventure Race is providing kayaks, paddles, and buoyancy aids for all participants. You may be required to take “Time Out” (with the clock stopped) in the transition zone. Kayak partners will be assigned on the basis of the time people reach the departure point. For teams, the clock will not be stopped until both team members are in the transition area.

A kayak ‘taster’ session will run on Whiddy Island in June! Follow our to find out more.

There will parking available for participants at the following locations:
• Westlodge Hotel Overflow Car Park – access point by Sailing Club and Westlodge Hotel (marshalls will direct you here)
• Bantry Town, free with 2 and 3 hour limits
• Public Car Parks (Free and no time limit) on Pier Road, off Wolfe Tone Square.
The Abbey Pier is located between the Westlodge Hotel and Bantry House (both easily located on Google Maps) on the N71.

The Bantry Bay Adventure Race (BBAR) is an endurance and versatility sport comprising a combination of running, kayaking and cycling. The clock will run continuously apart from during the periods (a) between the end of your run and the start of your kayaking, and (b) the end of the kayaking to the point where the cycle begins (this second measure is in place to ensure safety as entrants move out onto a brief stretch of the N71).

Every competitor in the individual events must complete the prescribed distance in each discipline, one after the other in the above order.

The Organising Committee has prepared a set of contingency plans should the weather on the day not be suitable for the health & safety of the athletes.

Each athlete upon payment of the entry fee must accept these rules and any changes made to the event. No refunds shall be forthcoming.

If you have to withdraw in advance of the race, we will do our best to help you allocate the place to an athlete on our waiting list. Places are only transferable if transfer is agreed with the organisers in advance of the event (Contact info@bantrybayadventurerace.com with any queries).

After all places are allocated, we will maintain a waiting list.