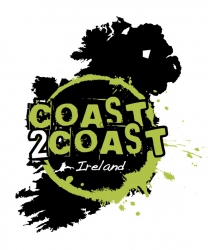 Ireland, an island steeped in history and mythology with scenery which rivals that of any other sights around the globe. For many years’ visitors have flown or sailed to Irish shores to take in these sights and to go home with great memories of this fantastic island. For one week in May many travelling will have their sights set on a truly iconic event – Ireland’s Coast to Coast Events.

Traversing Ireland in a west to east format the route of Ireland’s Coast to Coast starts on the Wild Atlantic Way, will pass through unspoilt rural locations, through quaint villages and along one of the most famous waterways in Ireland – The Shannon – Erne Waterway and traverse one of our most beautiful mountain ranges the Mourne Mountains. Whether you choose to race the NON-STOP or TWO DAY multispot version or take part in Cycle Sportive or Mountain Race you will follow a route which winds its way along 312km of the best cycling, paddling and running terrain Ireland has to offer. Competitors will be truly astounded at the scenery and challenge laid down before them in this fantastic event.

For the non-stop competitors –

You will set off from Enniscrone, Co Sligo and race your way across Ireland in daylight and darkness along a stunning route to the finish line in Newcastle, Co Down. 312km later and at the finish line of the toughest multi-sport race in Ireland and one of the toughest in Europe. You will be able to look back and take pride in the fact you have just traversed Ireland on your own power.

For the two day participants –

Day one will see you set off on a route which will encompass just over 148km. You will be running on sandy beaches, cycling along deserted roads and paddling along one of the longest sections of inland waterway in Ireland before finishing at the shores of Lough Erne, Co Fermanagh.

At the break of dawn on day two you will set off on a cycling and running challenge totalling just over 157km. Expect more great cycling along quiet roads before setting off on the final foot section across the famous Mourne Mountains. The sight of the sandy shores in Newcastle, Co Down will be a welcome sight to all and with it will come a realisation that you have taken part in one of the toughest multi-sport events in Europe. All teams will be REQUIRED to have their own support crew who will transport bikes, clothing and gear between transition areas. Our kayak partners Mobile Team Adventure will look after the transportation of all paddling equipment (if booked) and you will only be required to transport your paddling kit if you opt to bring your own kayak, buoyancy aid and paddle.

No matter whether you are doing the non-stop or the two day version, everyone in the 26 Extreme Coast to Coast will follow the same route.

The breakdown of distances and disciplines will be as follows:

The day one breakdown of distances and disciplines will be as follows:

The day two breakdown of distances and disciplines will be as follows:

Cut off times are part off all serious endurance events. You need to be able to make all cuts to allow the race to move across the country and ensure operational personnel are where they are supposed to be when they are supposed to be. Cut offs also ensure competitors safety keeping you out of the water and off the roads after dark. It’s tough to be stopped at a check point and the decision to cut someone form the course isn’t one we take lightly. That said they are there for your safety, your fellow competitor’s safety and the 26 extreme crew. Once the cut off at a CP has been reached the personnel at that CP will start to make their way through the course clearing it as they go. You will not be allowed to continue.

Non Stop Event Cut off times – to be updated shortly

Race management reserve the right to alter the course at any time in the interests of competitor safety. Should the water or mountain stage become dangerous an alternative plan B will be put into operation. Plan B for the mountain stage will take competitors away from the high mountain stage and into Tollymore and Donard forest to the finish.

Other instances where you might be cut from the course are as follows but not limited to:

– Your kayak is letting in water or damaged

– You are missing part of your mandatory kit

– Your bike lights stop working and you have no back up

– You become physically exhausted and become a danger to yourself, other competitors or the general public

– You sustain an injury that could deteriorate if you continue

– You get lost on any section of the course and are unable to re-join the point you left the course.